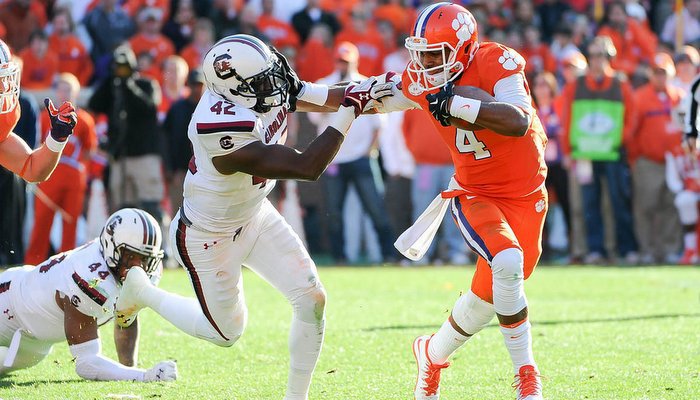 Ready for this Moment

Last year former Clemson player Harold Coleman told me that Watson was confident despite being a true freshman because he had been preparing for this moment for years. I thought it was a great point, and it looks like Watson is prepared for anything that has been thrown at him.

I also believe this team is ready for this moment. Louisville is 0-2 after blowing a lead at home against Houston this past weekend. One of the story lines Thursday night is the atmosphere in Papa John's Stadium. Louisville could have very easily and ranked in the top 25. Instead, the Cards are 0-2 and questions abound. A 2-0 crowd would have presented a different atmosphere than what Clemson will face this Thursday.

Coaches do have to be concerned about a team's first trip on the road each season. This is a good opponent, and it has traditionally been a tough place to play. Clemson is a young team. So how will the Tigers respond Thursday night to the first adversity of the season?

To be clear, this is not the biggest game of the year. Notre Dame, Georgia Tech, Florida State and South Carolina are bigger games for this program. However, a loss to Louisville takes a little luster from the next game against Notre Dame. With each win, the stakes get bigger. If Clemson wins Thursday, the Notre Dame game could see two teams ranked in the top ten. A win over the Irish means the Georgia Tech game becomes the next monster. The FSU, then South Carolina. However, the first step comes Thursday night.

One thing we have seen in recent years in college football is each week you never know what team will show up. However, Clemson has been very consistent as a favorite under Dabo Swinney

There are a lot of unknowns Thursday night. Louisville has played three quarterbacks so far this season. There are a bunch of transfers on defense. Will the Cards play like a 0-2 team and point fingers if adversity strikes early Thursday night? Or will Louisville try to save its season with a big win over a top 10 team?

Clemson has a bunch of questions as well. The Tigers are playing a ton of young players who will face a loud road crowd for the first time. Clemson has place-kicker concerns. The Tigers kick-off coverage was suspect this past weekend. Will the Tigers be able to run the ball on the road?

We will get some answers Thursday night, and the stakes could get even higher with a road win in a tough place to play.