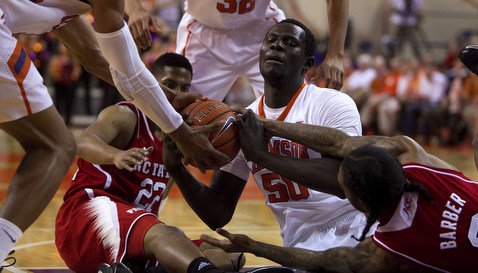 It's Not Our Party

The ACC basketball tournament starts today and many teams involved are excited about this tournament. In fact, this is a great time of year for basketball powerhouses.

Unfortunately as a Clemson fan, this is not our deal.

I do know some Clemson people that love the tournament and go every year. There are a few that really get into it, but most of us were priced out of it years ago and now have no interest as the product has declined. And let's be clear, it really isn't all that much fun watching your team get the hell beat out of it every year.

If you were alive the only time Clemson has won a post-season basketball tournament, you are at least 76 years old. Few remember the Tigers 1939 Southern Conference basketball title.

The average experience for Clemson basketball fans is to make a short trip to the venue, then be hounded by North Carolina or Duke fans for their remaining tickets. Simply stated, this is not fun.

Its hard being a football school this time of year in the conference. Year in and year out Clemson fans have had to endure this time of year. But there is hope it can be done. Florida State has no basketball history and the Seminoles won the tournament in 2012. Miami was in the same boat and won the league tournament the following year. Virginia had only one ACC title until last year.

If given a choice, we have it right. I would rather be good in football if I had to pick one, but it would be nice to feel like we have any chance to make a splash in the tournament. That certainly is not the case this year. Raise your hand if you have the Tigers advancing past a potential game against Virginia on Thursday.

There have been plenty of changes in the tournament through the years. In the old days only the champion advanced to the NCAA tournament. This was the ultimate pressure each March. The tournament has had as few as eight teams and as many as 15. We have seen the tournament start on Friday for many year and today it starts on a Tuesday. We have seen mostly Sunday finishes, but this year it is a Saturday final. But each year, it usually ends the same for Clemson...early.

It is harder to get it done here, but I think it can be done. It has been done, but it has not been done on a consistent basis. It would be nice to go into an ACC tournament with a little confidence and some swagger. That hasn't happened a lot around here.

So the Tar Heels, Blue Devils and several of the basketball powerhouses will live it up this week in Greensboro. I wish it was different, but its a party that we don't get to enjoy too often. Ours comes in December and early January in another sport.