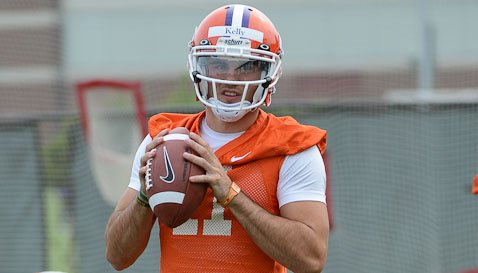 Up until that point we did not get a full look at Kelly's potential because of the rules that allowed sacks with two hand touch.  Kelly's running ability was not accentuated Saturday.  But we also saw his lack of discipline on the field when he made the two critical mistakes with the two bad interceptions.

Then came one of the telling signs for Kelly and his future at Clemson.  After a three and out Kelly wanted the offensive coaches to go for it on a fourth and three with the ball near midfield.  When they chose to punt, Kelly appeared to be extremely disappointed.  According to sources on the sidelines, Kelly yelled at Clemson offensive coordinator Chad Morris

Dabo Swinney
Head Coach
View Full Profile stepped in and was visibly upset with Kelly and his attitude.  At one point Kelly looked like he was ready to throw a football in the stands.  The altercation with the head coach lasted for a few minutes and by my account it was Swinney doing most of the talking.

I was sitting with my family and told them that this was typical of what we have seen from Kelly since he first arrived.  In fact, if you consider the tweet he sent to then backup quarterback Cole Stoudt

Cole Stoudt
Sr. Quarterback
#18 6-4, 205
Dublin, OH
View Full Profile it was even before he arrived at Clemson.  For those that don't recall, Kelly tweeted to Stoudt that he was on the bench for a reason and Kelly was coming to take his job.

Tajh Boyd
Quarterback (2009 - 2013)
#10 6-1, 225
Hampton, VA
View Full Profile to the one that I speculated it would get from Kelly.  My theory Saturday was that Kelly had a lot more maturing to do and would not reach his full potential until he matured on the field and off the field.

What I did not know was that Saturday after he was benched, that would be the last time we would see Kelly in a Clemson uniform.

Monday Dabo Swinney spoke of a pattern of behavioral issues they had gotten from Kelly.  My guess is that no one outside of the program knows all of those issues.

After Kelly's tweet to Stoudt before he arrived, Kelly was rumored to have issues with teammates, classmates, professors and coaches.  Stories circulated over the last year and a half that were not flattering to Kelly with most indicating the lack of discipline.  We saw him pout after not playing against The Citadel and that became another issue the staff had to deal with.

I was not shocked by the decision to dismiss Kelly.  Swinney is in charge of making the best decisions he can for the advancement of the entire program.  He did what he thought was best for the program and I suggest we trust him as he is the only one with all of the facts.

On the field, my guess is that this means Stoudt is almost guaranteed to start in Athens in the season opener.  It also means five star freshman sensation Deshaun Watson

Deshaun Watson
Fr. Quarterback
#4 6-3, 190
Gainesville, GA
View Full Profile is the number two signal caller heading into Athens and he could have a chance to win the job at some point.

Finally, I think Monday was a statement Swinney wanted to make about his program.  I am not saying Kelly is a bad kid but in my mind Swinney sent another message to his team.  He will instill discipline.  He will not let a player disrespect him or his staff.  The starting quarterback at Clemson is often times the face of the program and the face of the program cannot be seen acting the way we saw Kelly act Saturday.