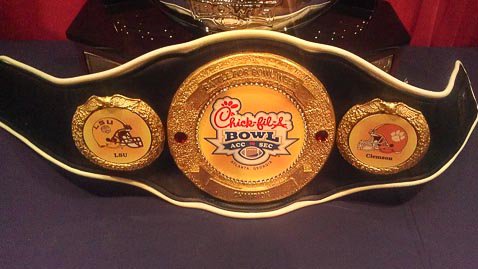 We spent an hour this morning on my radio show discussing bowl attendance and the huge issue that most bowls are facing.

At first glance I tried to analyze Clemson's bowl attendance issue in recent bowl games. Three years ago the Tigers went to the Orange Bowl for the first time since the 1981 season but turnout was disappointing.

Clemson was coming off of a great win over a top five team in Virginia Tech in the ACC Championship game. I thought the Tigers had a lot of momentum and ticket sales would become a great success. However, most blamed a mid-week game for the poor attendance.

This year Clemson is going to a BCS game for the second time in three seasons and will face one of the nation's top programs in Ohio State. However, ticket sales are dragging once again.

This game is on a Friday, so we can't blame it on a bad day of the week. My first thought was that many fans were protesting another loss to South Carolina and I am sure that is the case for some.

However, Clemson fans are no different from other fan bases. The real issues are not confined to the Orange Bowl or Clemson bowl games. With a rare exception, the bowls are hurting for fans in the seats.

Callers into the radio show this morning gave several reasons for the attendance issues. Secondary ticket market advantages were mentioned. The cost of tickets were an issue mentioned by several callers. Travel costs including outrageous plane tickets were mentioned. Two and three night minimums at hotels are a issue. Others continued to mention other expenses as a issue.

I have compassion for anyone that truly wants to go but can't afford it. Like many of you, I have a hard time paying for the three people in my traveling party when you consider that it costs an estimated $1,000 per person on this trip (plane, hotel, tickets, food, etc.) This is hard on many especially after spending so much on Christmas.

But finances are not the only issues. Some people have a hard time getting the time off. One caller mentioned that he will have some time off for Christmas and New Year's then have to take two more days off on top of that. Vacation days at the end of a calendar year are hard for some.

Some mentioned that the bowl tie-ins present a problem. Some schools get stuck going to the same bowls in a short amount of time.

Others thought that there are too many bowl games but that doesn't hold water because even the top bowls are hurting. Last year the Sugar Bowl had the lowest attendance in the bowl's history when only 57,000 showed up for fourth-ranked Florida and upstart Louisville.

And yes, it is easier to sit in front of your 60-inch TV and watch.

However, a more disturbing thing I heard and read concerns the attitude of fan bases. I will give you two examples. Last year some Clemson fans told me the reason they did not go was they did not want to see the Tigers get crushed by LSU. At the same time, Florida was 11-1 and ranked fourth in the country yet sold only 7,000 tickets to the Sugar Bowl. Many blamed it on the lack of interest because they were playing 22nd-ranked Louisville. Some Clemson fans thought the opponent was too tough while some Florida fans stayed away because they thought Louisville was not worthy of their attendance.

This is problem across the country. Perhaps the nation's best fan base is Nebraska. The Huskers are alarmed at the awful ticket sales for their Gator Bowl game this season.

LSU is known for its rabid fans but according to newspaper reports LSU fans are not buying tickets to their Outback Bowl game this year.

Central Florida had the greatest season in school history and was rewarded with a BCS bowl bid to the Fiesta Bowl. As of yesterday, UCF officials are preparing to take a huge financial hit because their fans have not bought tickets to the desert.

I know TV is the real answer to the bowl system but many of the bowls need fans to buy tickets, stay in hotels and eat in their local restaurants.

I am not sure of what needs to be done but it is obvious to me that the bowl system is broken and needs a major overhaul.

Patrick DeStefano
RS Fr. Offensive Line
#71 6-5, 275
Spartanburg, SC
View Full Profile , David Vaughn, and our great country and the men and women in uniform that protect and serve it every day, plus their families.