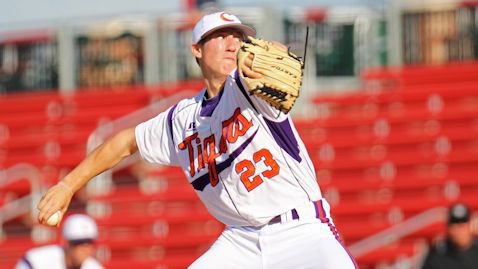 We have seen 40 become the magic number in college baseball. For teams in major conferences, 40 wins often means hosting regionals and super regionals. Since that is usually the goal for Clemson baseball, lets look at the Tigers' chances at 40 wins.

Clemson took two out of three this weekend at Pittsburgh to improve the record to 24-15 overall and 12-8 in the ACC. The Tigers have 17 games left and are still 16 wins shy of 40. Can the Tigers climb that huge mountain and win 16 of the last 17 games?

The schedule does lighten up slightly but this is a huge uphill battle to finish out the regular season. For a reference, Clemson comes into tonight's game ranked 32nd in the college baseball RPI.

This week the Tigers host Liberty who is 21 in the RPI tonight. Tomorrow night Clemson hosts Western Carolina who is 62nd in the RPI and already has a win over the Tigers.

Clemson is back in the ACC this weekend when it hosts Miami for a three game series. The Hurricanes are 20th in the RPI.

The following week Clemson has James Madison in for two games. James Madison is 206 in the RPI. Clemson has UNLV in for one game at Doug Kingsmore Stadium and one in Greenville. The Rebels have an RPI rating of 38 at this point. The only other non-conference regular season opponent is a single game at Furman who is 175 in the RPI.

Clemson has just two more ACC series after the Hurricanes this weekend. They go to Notre Dame who is 175 in the RPI for three games and host Boston College for three. The Eagles are 161 in the RPI.

The Tigers also have a chance to impress the NCAA selection committee in the ACC tournament.

There are 16 regionals and Clemson's 32nd RPI rating is not strong in terms of hosting. The Tigers are 9-9 away from home this year. They are 7-9 against top 50 teams which is respectable. However, Clemson is just 1-3 against teams ranked 51-100 in the RPI.

If Clemson is competing against southern teams for hosting opportunities the mountain is pretty steep as well. Florida is first, FSU is second, Virginia is fourth, South Carolina is sixth, Ole Miss is ninth, Kentucky is 11th, LSU is 13th, Louisiana-Laffayette is 14th, Vanderbilt is 15th, Alabama is 16th, Maryland is 19th, Miami is 20th, Liberty is 21st, Louisville is 25th, Tennessee is 26th and Georgia Tech is 27th.

All of these numbers are important but the only way to change them back in Clemson's favor is to simply play better. At this point, I am not sure if this team is capable of going 16-1. They play well for a short period of time but have hard time maintaining any momentum. Part of the reason for that is they so little pitching depth that can be counted on. This past weekend is a great example. Clemson got two great performances from Matthew Crownover

For the Tigers to reach the goal, Crownover and Gossett have to be lights out and others have to step up. Jake Long

Clate Schmidt
So. RH Pitcher
#32 6-1, 190
Acworth, GA
View Full Profile and Zac Ervin has pitched well at times but must be more consistent. The rest of the staff has to turn around their fortunes and close out this season on a different note. That is about the only way I can see this team climb this huge uphill mountain to 40 wins.