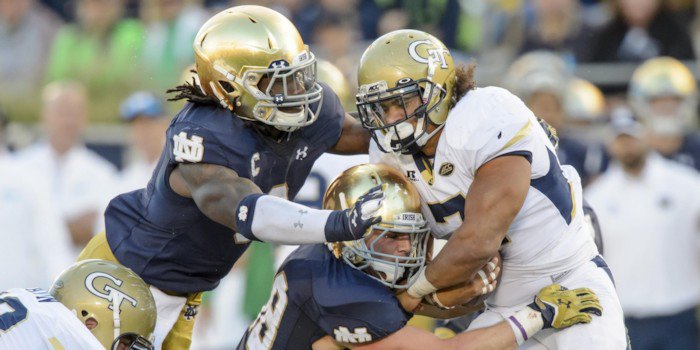 There has been a debate among my friends about the significance of next week's game with Notre Dame.

So, just how big is this game?

On one hand, there have been bigger games in terms of championships. This game is the first week in October and at some point could become a step to the national football playoffs, but it is too early to think in those terms for these two programs. This is not a game that features two top ten teams since the Tigers fell out of the top ten this week after an open date. There have been games where Clemson and the opponent have been higher ranked than this game. Also, this game has nothing to do with the conference and Clemson's goal of winning the ACC's Atlantic Division and the ACC title.

Clemson can still accomplish everything it wants to even if they lose to the Irish Saturday night. The Tigers can still win the division and the ACC. You can make a case that they can still make the college football playoffs with a loss. If you think in those terms, next week's game with Georgia Tech is bigger. Certainly the November contest with Florida State could be bigger. And yes, beating South Carolina in Williams-Brice in November can be considered bigger.

Another way to view the game is in terms of branding the program, and a win over Notre Dame is huge in those terms. Clemson has beaten LSU, Ohio State, Oklahoma, Auburn, Georgia and Florida State in the last few seasons. A win over Notre Dame on ABC in a night game following ESPN's Game Day would be another major victory for this program.

Also, I have to calm down because putting to much hype into a game can backfire. I remember the 51-14 ambush from FSU two years ago.

To me, this is a huge game simply because it's the next game. Dabo Swinney

Dabo Swinney
Head Coach
View Full Profile said, "Personally, I like to keep playing every week. Everyone has open dates, though. We try to use that time wisely. Shoot, our guys will be excited to get back to action. They're all huge. This game is no more important than Wofford or App State or Louisville. For us, they're all huge. Each game is kind of a season of its own. Our guys have shown up ready each and every week."

But let's be honest, Notre Dame is a big deal, and this game is special. This is ABC. This is Death Valley at night. This is ESPN Game Day. This is the biggest game in the country this week.

Just how special this game can be is up for everyone's interpretation. I would say I would rather beat Notre Dame, but would rather not lose to Tech or FSU. And at Clemson you can't have a good season with a loss to South Carolina. Finally, those teams come to Death Valley every other year. Maybe the fact the Notre Dame hasn't been here in almost forty years makes it more significant as well.