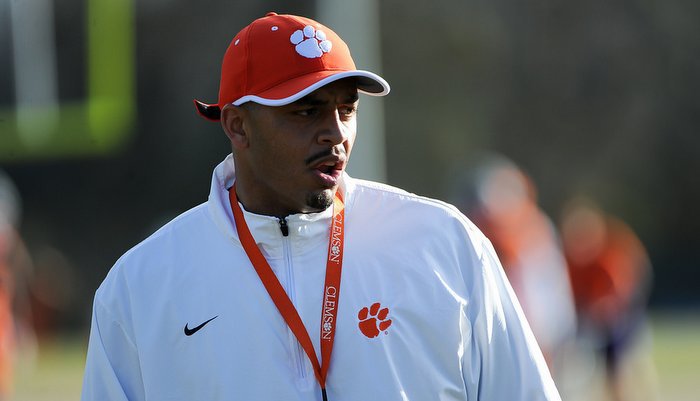 There are a lot of faces gone from last year's top-ranked defense. There are two new coordinators who take over this year for Chad Morris

On offense, we got our first look at the offense under Tony Elliott

Jeff Scott
Co-Offensive Coordinator / WR
View Full Profile in the bowl game. I think we learned that the coordinators will simplify things. I would look for the Tigers to run fewer plays but at a faster pace.

I do think it is hard to look at the game plan in the bowl game and try to project this year. Let's face it, Clemson's offense with Cole Stoudt

In the bowl game, Oklahoma was determined to shut down the run. They dared Stoudt to beat them. The new coordinators gave Stoudt a package that he could execute, and he played well. They didn't ask him to do anything he couldn't do.

With Watson, Clemson's strength is in the vertical passing. Mike Williams

Artavis Scott
So. Wide Receiver
#3 5-10, 190
Oldsmar, FL
View Full Profile is a bigger threat underneath as a result. Charone Peake

I think Elliott and Scott want to run the football, but will the line and the backs be able to be a run, first team? I think the Tigers will be able to run the ball, but the passing game will set up the running game in my opinion.

Grady Jarrett
Defensive Tackle (2011 - 2014)
#50 6-0, 290
Conyers, GA
View Full Profile , and the defensive line allowed Venables to create pressure without sending a lot of extra defenders. He did bring linebackers at times and brought an occasional corner blitz, but the front four were disruptive.

This year I think we could see Venables bring more pressure from more bodies. Replacing the pressure supplied by Beasley won't be easy, but an improved secondary could give Venables the confidence to designate more bodies to the pass rush.

Mackenzie Alexander is a big factor because he can shut down his receiver. As a result, I would expect Jayron Kearse

Jayron Kearse
Jr. Safety
#1 6-4, 210
Fort Myers, FL
View Full Profile to be able to play closer to the line of scrimmage and spend more time in the opposing backfield.

This team lost a lot of talent in the front four and linebacker corps. However, there are a lot of talented defensive players still on campus, and this freshman class has several guys that will help immediately.

Bennie Cunningham
Tight End (1972 - 1975)
#85 6-5, 250
Seneca, SC
View Full Profile , Kevin Orcutt, Alan Finley and our great country and the men and women in uniform that protect and serve it every day, plus their families.