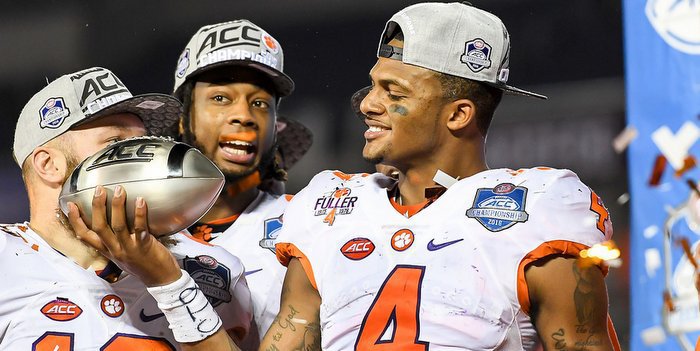 Wow, once again it was never easy with this Tiger football team but back to back ACC Championships is a great feat. I guess the nation watched a different game than Tony Crumpton did because the victory was most certainly not a rout and only a last minute stand by the defense secured the victory. Anyone that thought the game would be a blow out had not watched Clemson play good teams this year and surely did not see VT win on the road at Chapel Hill and South Bend. Both teams made plays, missed tackles, had penalties but in the end the Tigers were the best team and hung on. Thank goodness the game did not go to OT because every time Jerod Evans took off running, I just cringed.

The game with Ohio State will be a big boy game and the winner gets the chance to play maybe the best college team that I have ever seen in my 64 years on this earth. This has been quite a year in college football and on paper there are some great bowl games to come. What a great year for the ACC and here's hoping the success carries over to the bowls. Winning is so much more fun than the alternative and it will be another special playoff year because of the win in the ACC Championship game. It is great to be a fan of college football and especially great to be a TIGER!

It was another incredible win and Another Clemson Championship! The game wouldn't have gone to overtime because Justin Fuente said he was going for two if Tech scored a touchdown.

The Fiesta Bowl is massive, but I don't think Alabama is as great as you do. The Nebraska teams under Tommie Frazier were more impressive. The 2001 Miami team was better too. However, the best I have seen is the last FSU national title. That team was dominant.

You are correct about the ACC. The conference has to be considered better than its southern rival conference this season.

I’ve been reading your Blog for some time. Thanks so much for all you do! It really bummed me out when you crossed the line from Sports Guy to Political Activist with one statement. For the sake of many, maybe next time you will reconsider supporting discrimination in a sports blog.

The NCAA and ACC decision to support the civil rights of our transgender brothers and sisters by leaving NC is the right thing to do. I don’t think money should overrule protecting civil rights.

It was sad to hear you jump on the opportunity to support discrimination. Being “politically correct “ and not discriminating are not the same. One is legal and one is not.

As the Clemson’s brand grows is stature across the country I hope those of us who speak on its behalf can appeal to a growing majority of Americans who understand that interpreting the Bible to your desires cannot make discrimination okay.

Here is a link to Civil Rights law that protects our Transgender population. Check it out.

I am very concerned that we once again failed to put away an opponent. If they had scored Fuentes said they would go for 2 and given the way they were ramming the ball down our throat, I would not have been surprised if they converted the 2-point try. We played with fire in our special teams last year and it bit us in the butt. I hope we will stay focused as a team and coaching staff regardless of the score in the semi-final game (and beyond if we are so fortunate).

Our conservative play calling when we have a lead is simply ridiculous. It sends a message to the team which results in them not putting their best effort forward. As for the defense, we have given up too many points for them to be considered elite. An elite defense does not give up 20+ points when it plays a good team.

The evidence about our lackluster play is that we were outscored 21-7 after gaining a 21-point lead. We were lucky and that is not a recipe for being a champion given the teams we might face if we make it to the championship.

While there are always things that we can point to for improvement, I am glad this team keeps finding ways to win. Like you, I wish they would have put the Hokies away when they had a 21-point lead, but am ecstatic they found another win in the end.

Mickey, I'm a Huge tiger fan and a big fan of your show. My question is about our tempo offense. When Clemson use the up tempo offense they have a lot of success. The problem is that they don't use it enough. When Clemson have success with it they will stop using it. Make the other team stop you don't you stop it. Clemson could have blown Virginia Tech out if they would have just kept their foot on the gas pedal. I hope they do it to Ohio State if the opportunity presents itself.

I like the up tempo stuff as well. My guess is that Tony Elliott is a bright coach and he wants to make sure he gets the right call in the game. Clemson is 27-2 with him calling the plays, so he is doing something right.

Last week you raised concerns that the ACC Title game had been moved out of Charlotte out of political correctness. I am disappointed that the game was moved out of reach for me but I do not agree with the political correctness viewpoint. The governor and legislature chose to enact legislation that I consider disrespectful and discriminatory toward a group of citizens. The 4th, 5th, and 14th amendments to the constitution do not allow this. While I do not fully understand what drives the desires of the LGBT community, my lack of understanding does not diminish their value as human beings. Whenever government takes steps to diminish the rights of segments of our community, we need to stand up and so, “NO!” The sporting community and business community has taken the correct actions in rejecting the decision of the NC legislature. Finally, I am a devout Christian. The ‘Christ’ that I follow would have placed his arms around members of the LGBT community and wept with them over their pain of exclusion.

The statement I made was that I see both sides but I think they created a solution to something that wasn't a problem. I was probably being insensitive to some when I said I cared much more about Clemson football and much more about having to drive 16 hours roundtrip instead of four hours. I don't have a dog in the fight, but I do love Clemson football. I would have loved to see the game in Charlotte. I hope it returns next year no matter who goes to what bathroom.