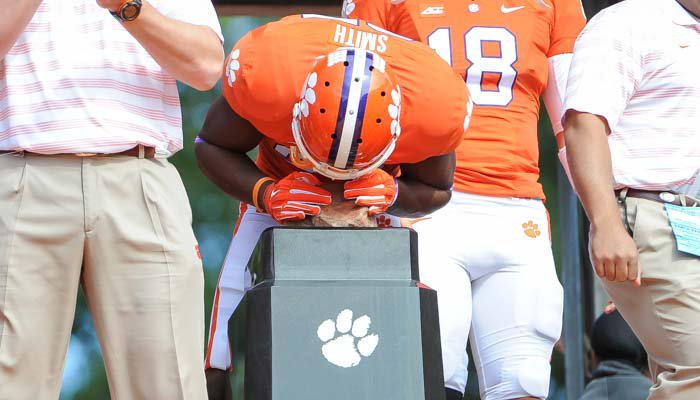 These questions are just a few that not just Clemson fans but law abiding citizens like me have about Clemson, Memorial Stadium and the low life scum that tried to steal or destroy Howard's rock.  When people are being tried for the last destruction why would anyone want to do something now?   How many past attempts at damaging the rock have there been through the years?  Are the gates all around the stadium locked?  Why in the world can Clemson spend $125 million on projects but not a few dollars a month to put cameras on the rock?   What will it take for the Athletic Department to learn a lesson?

I have no idea what goes on in the minds of a criminal. I have only heard of three attempts at vandalism in my lifetime. I am sure there have been more. The gates of the stadium are usually locked. Sometimes during the day one or two may be open but I think most are locked most of the day. They have cameras. I think they learned last time. The Rock was not damaged this time. The case was. I think the case served its purpose.

I have a idea on how to protect the rock. Put small no parking sign around that part of the stadium and the campus police will be writing them a parking ticket before they get over the fence.

They love writing those tickets huh? I have been pretty lucky avoiding them in recent years but I went through a spell a few years ago where I thought my car was a ticket magnet.

Do you have any idea what has become of Jake Long? Is he injured? He was a pretty effective weekend starter for a decent portion of last year and I haven't seen hide nor hair of him so far this season.

Long was effective at times last season but lost his spot as the year went on. He had a 5.30 ERA last season and I am not sure if that is a factor with confidence at this point. I just haven't heard a lot of buzz about Long in the fall or spring camps.