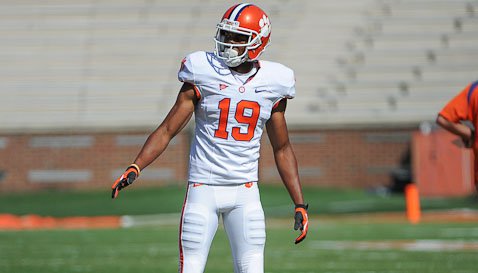 Your opinion on a few items for the 2014 football season:  Who will be the starting QB? Do you think Peake will be ready to go for the opener?  How many games can we win this season?  Do you think we can beat the Cocks this year?

Great questions. Thanks for the email. I can see any of the three guys starting at quarterback. DeShaun Watson is truly gifted and is a rare guy that could play as a true freshman. Chad Kelly

Chad Kelly
RS So. Quarterback
#11 6-2, 210
Buffalo, NY
View Full Profile is a terrific athlete with good speed and a power arm. But I think Cole Stoudt

Cole Stoudt
Sr. Quarterback
#18 6-4, 205
Dublin, OH
View Full Profile 's experience wins out early. I think Stoudt starts in Athens. However, I also think we will see two quarterbacks this year. Will that be Stoudt and Kelly or Stoudt and Watson?

I have been told that Charone Peake

Charone Peake
Wide Receiver (2011 - 2014)
#19 6-3, 200
Moore, SC
View Full Profile is on schedule and the staff expects him to be ready for fall camp. Physically he is expected to be back 100% but like every injury the question is his confidence with the knee.

It is way too early to tell but I am going with nine regular season wins and reserve the right to change my mind next week.

Again it is early but I expect Clemson to beat South Carolina this November.

I read your article about Notre Dame today, "In or Out?"  I have to say I am frustrated we have chosen to add Notre Dame as a part-time member of the ACC.  I really do not see the benefit of having them in the conference playing basketball, soccer, baseball, etc. when we know their real draw is the national interest in their football program.   I also agree that asking Syracuse, BC, and Pitt left me scratching my head.  I understand the big picture.  The NCAA is moving to super conferences and the Big East was dying, but I sure wish we had been able to make a move a few years earlier when our options might have been better.  I know the snobs in Chapel Hill and Durham did not like West Virginia, but I would like to have asked them to join.  I might even get used to Syracuse and Pitt, but BC is just too weird for me.

I always appreciate the kind words on Ryan. He is incredible. What a great kid with a great story. We are extremely blessed.

The ACC is hoping Notre Dame's four-game football schedule will eventually help draw them into the league full time. I have my doubts. Why would they join? Now they get the best of both worlds. They are an independent but they get four games a year. I have not been to Pittsburgh yet but I have been to Syracuse and Boston College and I can tell you from my experience, it didn't feel like an ACC school to me.

I agree with you all the way. SU, BC, Pitt do not belong in the ACC and SU, in particular, has no interest in being in the conference. All they do is complain, they bring absolutely nothing to the conference (even with their all world bball coach who has over 900 wins and ONE Title), they don't like the South and I for one wish they would just get up and leave. They come here on Oct.25th and I certainly hope Dabo does NOT lay off but rather run it up as high as it will go! ND needs to either get in all the way or get out! Good article on your part.

I haven't thought about the Syracuse complaining issue but you are exactly right. Boeheim complained. Their football coach has been a complainer. Now that you have brought it up, I think you have a great point.

What is the story behind Patrick DeStefano

He had a neck injury in the fall. There was concern about the long-term effects of the neck injury. After consulting with specialist, Destefano felt it was too big of a risk to continue playing football.

Something that I have never really understood is how they come up with the stars for a player.  I am sure size, speed, general play all have something to do with it, but how do they come up with these evaluations?  I have never put a great deal of stock into how many stars a player has, but more of how that player can fit into what we do.  I believe the staff continues to recruit to meet our needs and the stars seems to be more for the talking heads and the fans.  I agree with Dabo that stars should be given to a player after their junior year.

College coaches don't care about star ratings. Every staff does their own independent evaluations. The star ratings are for fans. The recruiting services have to fit every player into a rating. They watch film, go to games and attend combines where they take a lot of information on each prospect and project him into a star rating. In the end, some players are rated about right, some are overrated and some are underrated. However, the only thing that matters is wins and losses.

In regards to your article " KJ the warrior" I agree with all the positives any one can list for KJ. His performance against Notre Dame was nothing short of heroic. I agree some of the rest play with effort. If I played on the team I would give great effort but the results would be pathetic, point being effort is meaningless without basketball skills if the goal is to win.

Considering Clemson to be on the NCAA bubble seems unrealistic. In my mind they are on the NIT bubble and that's only due to the decline in ACC level of play from the old stalwarts such as NC State Wake Forest, Georgia Tech, etc. over the past few years. Losses to Arkansas, Auburn, and U Mass will keep them out unless they can win at least five and probably six more games which is a pipe dream for only those with orange colored glasses topped with blinders.

I don't think Clemson is an NCAA tournament team but several of the websites that do it for a living have Clemson on the bubble. ESPN's Joe Lunardi has Clemson among the next four teams out right now. I think those guys are much more qualified to tell us where things stand than either you or I.

Levon Kirkland
Linebacker
# 0, 0
,
View Full Profile and family, Catherine Sewell, Randy Davenport, Patrick Destefano, David Vaughn, Keith Dalton, and our great country and the men and women in uniform that protect and serve it every day plus their families.