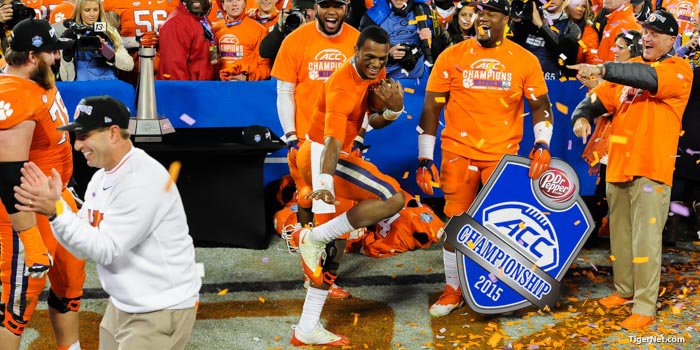 Clemson's official Deshaun Watson for Heisman video made what little hair I have left on my head, stand up. I got a little emotional watching the announcement of the Heisman finalists last night.

It is just a statue. It is won by playing a game. And of the voters give it to the nation's best player, Watson will win the award.

Watson is the only player since 2012 to have at least 3,500 yards passing and 800 yards rushing. He is third in the country in completion percentage. He was the ACC Player of the Year. He is 17-1 as a starter and is 17-0 in games that he started and played past the first quarter.

He has led his team to the nation's number one ranking in each of the College Football Playoff Polls this season. His team is the nation's only undefeated team. He has beaten four teams this year that won at least ten games, and three teams ranked in the top ten of the final College Football Playoff Poll. He has led his offense to at least 500 total yards in each of the last nine games of the season.

But that is not the best argument for Watson and the Heisman this season. My best argument comes in value. Where would Alabama be without Henry? Where would Stanford be without McCafferey? Now, where would Clemson be without Watson? My guesses are that the Crimson Tide and Cardinal's records would be close to where they are now. I have no doubt Clemson would not be number one and undefeated without Watson. Simply stated Watson is more valuable to his team than anyone in the country.

Finally, Watson is the best player in the country. My guess is if you surveyed every Division I coach of he could take Watson, Henry or McCafferey, a large majority would take Watson.

This Heisman vote should be very close, and I wouldn't be surprised if Henry won the trophy, but Watson is the nation's best football player and deserves the statue.