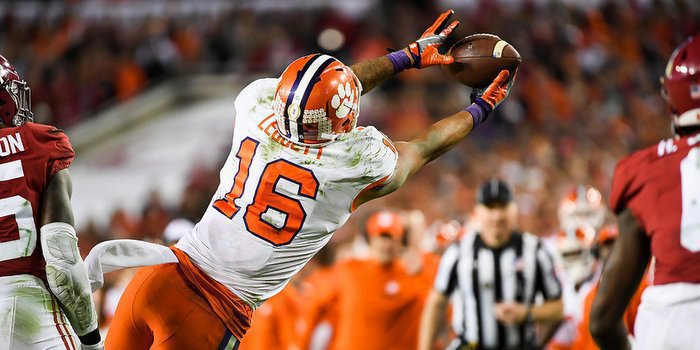 I was a young Tiger fan when Cunningham played at Clemson, but even then it was easy to see how much bigger, faster and smoother he was compared to others around him. He was a consensus first-team All-American in 1974 and a first-team All-American in 1975. He was also a two-time All-ACC selection in those same seasons. The Tigers didn’t throw it a lot during his seasons but he did have 64 catches for 1,044 yards and ten touchdowns in his career. I do not take professional football into consideration for these rankings but he did play ten years in the NFL and won two super bowl rings.

Allen is the only Clemson player to win the Mackey Award for the nation’s top tight end. He won the award in 2011, the same year he was a consensus All-American. In his Clemson career he had 93 receptions for 1,079 yards and 12 touchdowns including his final season where he had 50-598-8.

No tight end at Clemson started more games than Leggett (38). Leggett is a two-time second-team All-American and a two-time All-ACC selection. In his career, he had 112 receptions for 1,598 yards and 18 touchdowns. Leggett’s amazing grab on Clemson’s final drive set up the game-winning touchdown against Alabama for Clemson’s second national title.

Riggs was perhaps the best combination of blocking and receiving skills of any tight end I have seen at Clemson. He was an All-ACC selection in both 1985 and 1986. Riggs played seven years in the NFL.

Palmer was a terrific receiving tight end at Clemson. His best season came in 2009 when he was selected All-ACC. His Clemson career was followed by a five-year stint in the NFL.

Here are the top ten offensive linemen I have seen at Clemson:

Bostic and his brother Jeff played on one of Clemson’s finest offensive lines. He is a two-time first-team All-American as he was selected in 1977 and 1978. He was also first-team All-ACC in both seasons. He played ten years in the NFL and was on the All-Rookie team in 1979. Jeff was also under consideration and was a better pro who played 14 years in the NFL, made the Pro Bowl and won three Super Bowl Rings but he did not make an All-American team at Clemson.

Here is yet another great offensive lineman at Clemson who had a brother play at a high level for the Tigers as well. Kyle Young is one of two two-time Rimington Trophy finalists. He is also one of only ten offensive linemen to be named All-American twice. The former was All-ACC in 2000 and 2001. Young started 40 of his 47 career games and played over 3,000 snaps and had 412 knock down blocks.

Long is Clemson’s only Outland Trophy finalist. He is one of the few offensive linemen to start his first game as a true freshman. Long was a first-team All-American in both 1989 and 1990. He was also All-ACC in both seasons. He played 40 games, started 25 and had 141 knockdown blocks in his 1,718 snaps.

Hyatt is the only current Tiger on this list and can certainly climb higher in this season and a fourth season if he stays all four years. He is the only offensive lineman in Clemson history to be a freshman who was named All-ACC. Last season he helped the Tigers to their second national title and was once again named All-ACC. This season he could be the second three-time All-ACC offensive lineman in Clemson history.

Seegars is yet another two-time All-American. The guard was a second-team All-American in 1992 and a first-team all-American in 1993. Seegars started 35 of the 41 games he played in at Clemson. He logged 2,456 snaps and compiled 213 knockdown blocks.

Flesch is Clemson's only three-time All-ACC offensive lineman. He was also a consensus first-team All-American in 1991. Flesch started 45 of the 48 games he played at Clemson. He had 2,657 snaps in his outstanding career and had 267 knockdown blocks.

Freeman and Kyle Young are the only two-time Rimington Trophy finalists in school history. He was a first-team all-American in 2012. The son of a high school coach was All-ACC in both 2011 and 2012. No center has started more games than Freeman (49). He played 3.361 snaps in his 51 career games and compiled 171 knock down blocks.