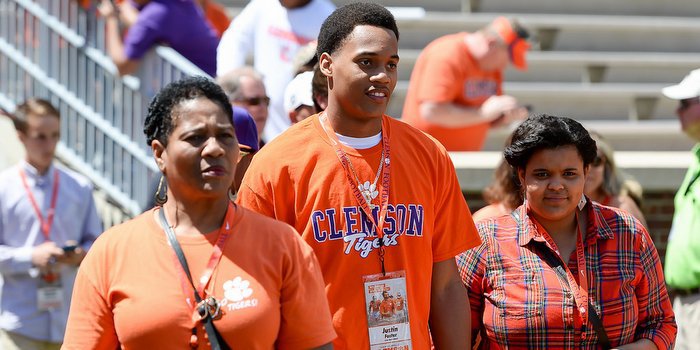 It feels good to sit down with the iPad and actually write a blog. Last week I was as sick as I have ever been and missed two days of work and the entire week of blogging. Clemson athletics took a backseat to not kicking the bucket. But I feel energized and am ready to take on the world this week.

I had several topics I wanted to get into today like Clemson basketball, but I will save that for Wednesday to preview the big game with Pittsburgh.

Instead, I wanted to write about one of the most exciting aspects of Clemson athletics right now and that is the football recruiting class of 2017. The staff has a huge junior day coming up this Saturday which could go a long way in keeping the incredible momentum of the program.

Dabo Swinney announced the groundbreaking ceremony this season of the new football facility and the Tigers' magical season paved the way for a high profile program to go to even higher levels. I fully expect the Class of 2017 to challenge for the best class in school history and take this program to an even better status among college football's elites.

Clemson's wide receiver board is the nation's most impressive as well. Clemson leads for the nation's top-ranked wide out in five star J.J. Robinson and is also so heavily involved with four-star and top ten prospects like Tee Higgins and OrTre Smith that they will end up turning down some really talented prospects at this position.

The biggest need of 2017 appears to be in the secondary, but help could be on the way. The Tigers will get long looks from five star corners like William Poole and four stars like Trajan Bandy, LeAnthony Williams and Jamyest Williams. The news may be even better at safety where Clemson is highly thought of with the nation's second-ranked safety in Devon Hunter, the number-four ranked safety in Xavier McKinney, the number-five ranked safety in Deangelo Gibbs, and the country's sixth-ranked safety in Davondre Robinson.

At running back players like (4)D'Andre Swift, (6)Cordarrian Richardson and (7) Anthony Davis are high on the Tigers.

The Tigers are the early leader for the nation's ninth-ranked offensive guard in Matt Bockhorst, who could follow offensive tackle Noah DeHond in committing to the Tigers.

Clemson could get a long look from the nation's top weakened defensive end in Joh Kaindoh and the country's number two and three strong side defensive ends in Zachary Carter and Malik Herring.

The Tigers just added two of the top 16 players in the country in five star linebackers Shaq Smith and Tre Lamar. An addition of Justin Foster, the nation's number five outside linebacker in the Class of 2017, could really strengthen the linebacking corps.

The point is that Clemson recruiting continues to climb into a different level and the Class of 2017 could challenge for the best in school history. The only thing slowing down that momentum is the lack of scholarships available for the class.

Saturday is another big day in the building of this elite football program. Look for positive returns this weekend.