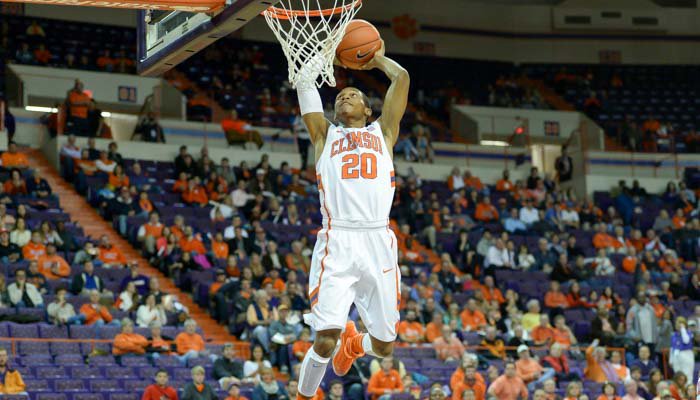 I always talk about how long a football season can be. The momentum of a football season seems to usually have a couple of ebbs and flows. But a basketball season is even longer. They start playing in November and go until late March or even early April.

This season of Clemson basketball is a great example of how seasons have a few ups and downs. In November this team dropped a couple of bad decisions. It didn't look good for this team even in an early January loss to North Carolina.

Those loses and big issues seem like a long time ago. This current stretch has seen the Tigers play as well as they have under Brad Brownell

Brad Brownell
Head Coach
View Full Profile . This team is different and one player is the best example of this. Jordan Roper

Jordan Roper
Jr. Guard
#20 6-0, 165
Columbia, SC
View Full Profile is not close to the same player he was in November.

Roper had 24 points on 8-11 shooting Saturday. He went 6-8 from three. Roper scored the first 11 Clemson points. His hot start set the tone for the Tigers in their 64-49 win over Boston College Saturday.

You can break down basketball in a lot of different ways, but nothing helps like great shooting.

In the last three games Roper is 10 of 17 from behind the three point line.

The Tigers are now seventh in the ACC. A goal for this team should be a first round bye in the ACC tournament. Teams that finish 10th through 15th have to play in the first round.

This week Clemson has two road games in the Sunshine State. Wednesday the Tigers shoot for revenge against Florida State and Sunday they face a talented group from Miami.

Join the Columbia Clemson Club for Lunch with Mickey Plyler on February 6th. He will discuss the Clemson recruiting class and we feel sure he will have some comments on the 35-17 victory over the Gamecocks.

When: February 6th at Noon

Lunch is $20 for members and $25.00 for nonmembers. Please purchase tickets prior to the event.