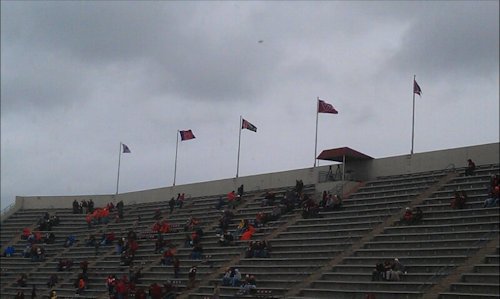 I usually don't watch ESPN's Tuesday night football because I don't enjoy watching bad football.  I choose Netflix and would rather watch an episode of “House of Cards” or “Breaking Bad” instead of Miami (OH) at Central Michigan.

But, I love college football and I was looking forward to watching last Thursday's two showdowns, plus a full day of college football Saturday.  Looking back, I should have gone with another scandal in Walter White's life.

Thursday's games were disappointing in my opinion.  Baylor turned it on in the second half but I was disappointed in their first 30 minutes.  And let's face it, Oklahoma stunk it up.

Stanford was very impressive, but they are not the most exciting team to watch and Oregon acted like they wanted nothing to do with blocking or tackling Stanford on this night.

Saturday was worse.  I expected Virginia and North Carolina to be a bad game between two struggling programs, but since when was it hard to watch Florida?  There can't be too many teams in the country that are harder to watch than Will Muschamp's group.  From the number of empty seats in the Swamp, it appears Gator fans agree with me on that one, too.

How did Arkansas get to be unwatchable?  I expect Kentucky to bad every year and they usually don't disappoint, but have you tried to watch Tennessee play this season?  Someone tweeted a few weeks ago that Tennessee and Kentucky were so bad that the SEC was going to let them combine teams and they would be called Tennesucky.

Saturday did not change my mind of teams that I knew were bad.  I expected a 1-9 Cal team to look bad and I knew watching Syracuse and Maryland was going to be an eye sore.  But even the teams with decent records are sometimes hard to watch.  The Michigan and Nebraska game catches your attention because of the uniforms of the two traditional powers playing in one of the best college stadiums in the country.  However, it didn't take too many plays to see that the Huskers and the Maize and Blue and were not very good.

Every Tuesday on my radio show we reveal our power rankings of our top 25 teams.  This week I am not sure I can find 25 teams to rank.  At least this week I won't have to pretend Notre Dame is a good team.  Same thing can be said for Texas Tech.  But does Georgia deserve to be ranked again?  Texas?  Oklahoma? Miami? Arizona State?

Saturday reminded me of how much I love Clemson football.  I love going to Death Valley and watching the Tigers.

Clemson players miss tackles, turn the ball over and miss blocks, but at least they are my team and I am vested in those mistakes.

Clemson is not the nation's best team but the Tigers are fun to watch and the venue is usually electric.

Dabo Swinney
Head Coach
View Full Profile might not be the nation's best coach, but he has energy and is more compelling than most coaches in the country.

The only things I saw more impressive or more interesting than Clemson football this Saturday were  Johnny Manziel's scrambling, Duke's DeVon Edwards, UCLA's linebacker turned tailback and Alabama's second half.

Open dates are necessary, but I am glad I get to watch Clemson this week even if it is Thursday night and I am hoping Georgia Tech plays the role of bad football.