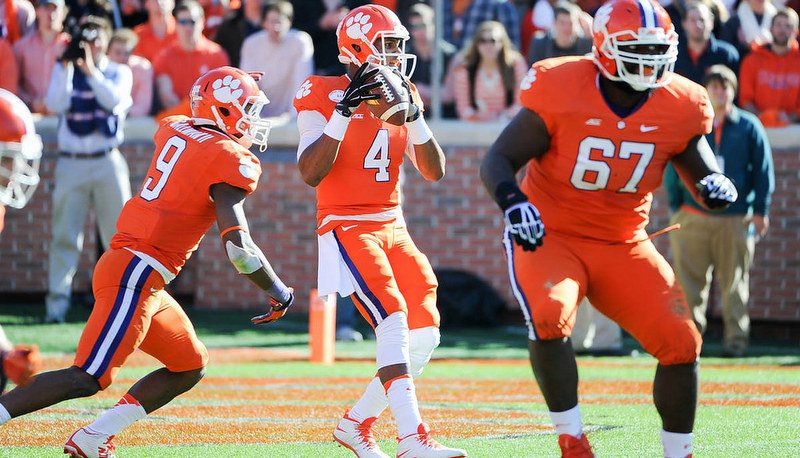 Clemson opens the season with a home game against Mike Ayers and the Terriors. The major issue here will be stopping Wofford's unorthodox offense.

No one returns more starters next season than Appalachian State who brings back 20. The Mountaineers lost five of their first six last season but finished the season on a six game winning streak.

Clemson makes its first trip to Louisville to face Bobby Petrino. The Cardinals bring back both quarterbacks in Will Gardner and Reggie Bonnofon, but six starters have to be replaced on offense. The Cards will miss running backs Michael Dyer and Dominique Brown and All-American wide out DeVonte Parker. On defense they lose playmaking pass rusher Lorenzo Mauldin. Two underclassmen safeties also left school early. I don't like a short week and I don't like Thursday nights in a tough environment.

The Irish come to Death Valley for the first time since 1977. Notre Dame ended last season by losing five of its last seven contests. Malik Zaire looks like he has beaten out Everett Golson at quarterback. The Irish bring back four starting offensive linemen and its leading rusher. On defense the good news is nine starters return. The bad news is they weren't very good in the last half of the season a year ago. An open date before should help.

The Yellow Jackets are coming off of a great season and an Orange Bowl victory. The good news is eight starters return on an improved defense and Justin Thomas is back at quarterback and will have four returning starters on the offensive line. The bad news is most of the skill players are gone on offense. I don't like this game after an emotional contest with Notre Dame. An open week would have helped to prepare for Paul Johnson.

Steve Addazzio does a good job at Boston College and he will have to in 2015. The Eagles lose all five starting offensive linemen and their biggest playmaker in quarterback Tyler Murphy. On defense six returning starters return. Special teams had some major issues last season and cost Boston College its bowl game.

Clemson plays at Miami for the first time since 2009. The Hurricanes return Brad Kaaya at quarterback but has to replace Phillip Dorsett, Duke Johnson and Erek Flowers on offense. They have five returning starters on offense including two talented backs in Joe Yearby and Gus Edwards. On defense Anthony Chickillo and Denzel Perryman are gone but Deon Bush is one of six returning starters.

Clemson travels to NC State where it has won four of the last five games. Last season State finished at 8-5 including a bowl win. The Pack won four of its last five games a season ago. Jacoby Brissett returns at quarterback. He will have Brian Underwood back at wide receiver and Robert Crisp back on the offensive line.

The Seminoles have lost one football game in two years and have recruited as well as anyone in the country. However FSU loses as much talent as anyone in the country this year. Jameis Winston will be missed the most. The former Heisman Trophy winner had two incredible years at quarterback but the Noles must replace him and his leadership. FSU also loses perhaps the best receiver in school history in Rashard Greene and a great tight end in Nick O'Leary. Florida State also will have only one returning starter on the offensive line, in fact FSU has only two returning starters on offense. They also loses two great corners in PJ Williams and Ronald Darby along with two NFL defensive linemen in Mario Edwards and Eddie Goldman.

Clemson makes its second trip to the Carrier Dome. This time the Tigers face a program in a major rebuilding mode. The Orange finished last season by losing nine of its last ten games. In November at least the humidity want be a problem like it was last time in the intimidating Carrier Dome (JK).

The Deacs are a facing another rebuilding season. This one will be senior day and may be a chance at the Atlantic Division title. If you can't have an open date the week before a trip to Columbia, this is the next best scenario.

The Gamecocks took a big step back last season. They have question marks at quarterback and wide receiver entering next season. The defense was a mess last season and their are holes on paper at this point on that side of the ball.