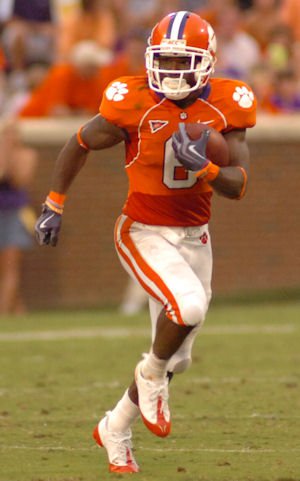 Ford lead the Tigers in receiving with 26 catches for 358 yards and 2 touchdowns.

CLEMSON -- Jacoby Ford is looking for extra tickets for Saturday’s game against the Miami Hurricanes.

He needs at least 20 to accommodate family and friends’ requests for tickets to watch the Royal Palm Beach, Fla., native play for the Clemson Tigers.

He is probably not the only Clemson player in search of extra tickets for the 3:30 p.m. kickoff in Land Shark Stadium. The game will be a reunion for many players.

Clemson has 16 players from Florida on the roster and the excitement surrounding going back to the Sunshine State to play the Hurricanes is apparent.

Ford’s parents will travel the 45 minutes from their home to go to the game.

Chancellor will wear the number 6 to honor Howard, sharing the jersey number of Ford for this game.

“After I heard the news on Sunday, I just automatically thought we were going down to Miami, and it’s been a dream come true to go down to Miami. I want to honor Jazz,” Chancellor said.

The game is not only a homecoming for many players, it an opportunity to play a top 10 team on the road, Ford said, and a chance to prove doubters of the program’s progress wrong.

“It’s just another opportunity to put this program on the map and take it to a different level,” Ford said. “This is right where we want to be. You always want to play some really good teams. This will be our third top 15 team this year. We want to go out there and make a statement.”

It is also a tombstone game for the Tigers – a Clemson victory over a top 25 team on the road earns a tombstone for the graveyard behind Death Valley.

“These are the kind of games you ask for; to play a top 10 team,” Ford added. “We have an opportunity to go out there a put another tombstone in our graveyard. It’s a team we are capable of beating if we play the way that we can.”

And like the Tigers 38-3 thumping of Wake Forest last week, to win in Miami will require near perfect execution on both sides of the ball.

“We are just really trying to get this football team to focus on execution,” said head coach Dabo Swinney. “As I tell the guys nothing matters but us; not the where we play, not what is on their helmet, what ranking is by their team name, not what the weather is like, not what color our uniforms are. Nothing matters but us and how we play because we are good enough.”

“I think it’s going to be a good game, a good matchup with these guys,” Ford said. “It’s not a team we can’t beat or that we have any doubts in our minds. You know it’s going to be a real fun game. You always want to play Miami because of tradition and their history. To go down there and play them that means a lot to me, growing up a Miami fan. I always wanted to play for them, but now I’m going to play against them.”

"When I came to Clemson, some of my family switched over, but a lot of them are still, 'The U this,' 'The U that.' Everybody tells me 'the U' is back, speed and talent and all that. I just laugh it off and say, well, prove it on Saturday."