They are affectionately called the “Big Uglies”; offensive lineman on football teams that are responsible for making an offense good, great, or bad. With all due respect, at Clemson they have been “big” and “ugly” but it is a stretch to look at this group the past two years and use the term “affection”.

Let’s introduce the disclaimers right from the start. Each of them could snap me in half with their fingers without too much effort on their part. I certainly don’t want to run into any of them in a dark ally when they read this. Hopefully, they would show mercy if we see each other on the sideline this fall.

The other disclaimer that we should acknowledge is that the 2009 version of this offensive line had to play as youngsters last year. Maybe they had to play too early to be effective.

Ok, with the disclaimers on the table, I must say that we have a culture of passive offensive lineman that have not been able to man-up against good defenses.

The past two years, our Tigers have had arguably two of the most talented tandem running backs that Clemson has ever had. I’ve seen Kevin Mack, Cliff Austin, Terry Allen, and Kenny Flowers. James Davis and CJ Spiller are the types of running backs that programs win championships with, just like those mentioned above. That is, unless you don’t have any blocking to give the running backs a chance.

Clemson has been amazingly inept in running the football against good football teams the past two years. A quick browse shows that Clemson has faced eleven teams from major conferences the past two years that won eight or more football games in a season. I don’t know that you can necessarily constitute winning only eight games as a good football team, but I think that is a fair starting point. I threw out any team like The Citadel, SC State, and bad ACC teams with losing records from the calculations. To win championships, you have to run the football against good teams, not just a team coming to Death Valley to receive a paycheck. Lost in the numbers of Rob Spence’s offense was the fact that we padded our rushing stats the past few years against bad football teams that we could have won the games even if we threw the ball every down. 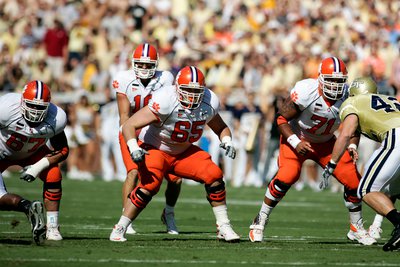 I also looked at net rushing yardage, not just yardage gained from rushing the football. Sometimes our rushing numbers were lowered because of the number of sacks given up (which counts as negative yards towards rushing statistics). Again, good offensive lines can run the football and protect their quarterback and maintain healthy net rushing yards per game.

So I examined how we have run the ball against good football teams the past two years. In those eleven games the past two years against teams that finished the season with eight or more wins, Clemson has rushed for more than 100 yards only three times (Maryland in ‘08, Wake Forest in ‘07 and Auburn in ‘07).

Don’t be mistaken in thinking that 2008 was the exception to the rule. In 2007 Clemson managed only 97.5 yards rushing per game against teams that won eight or more games. In the biggest game of the year, a game against Boston College with the ticket to Jacksonville for the ACC Championship game on the line, Clemson struggled for only 47 yards rushing. Against Virginia Tech earlier that year, the Tigers rushed for only 8 yards in the lopsided loss to the Hokies. Amazingly, the 47 yards against BC and the 8 yards against VT came in games at home! To think in two football games in front of sold out crowds in Death Valley that Clemson would only muster 55 total yards rushing would make Danny Ford throw up on his tobacco juice and Frank Howard roll over in his grave.

I don’t think I’m making an outrageous claim when I suggest the reason we have not played in a championship game the past two years is because we can’t run the football against good football teams. It really is that simple, and yet that difficult to explain.

I can’t recall many games in the Tommy Bowden era where I felt we were the tougher football team. South Carolina in 2002 and Georgia Tech in 2006 come to mind. But faced with the overwhelming statistics in the opposite direction, you almost have to think those games were flukes instead of the norm.

So you think that winning championships in this day and age of fast-paced offenses is not critical? Think again my friend.

I’m not smart enough to know whether the two-point stance or the three-point stance is a reason, a contributing factor, or irrelevant to the lack of production in the running game against good teams.

Sometimes, especially at the line of scrimmage, attitude and heart equates to success as much as technique.

I’m sure it is a sore spot with those offensive linemen. They want to be tough. I’m sure they take pride in beating the man across from them. I don’t think any of them lie awake at night and take pride in the sobering rushing statistics that have swamped this program into the mediocrity of 7 and 8 win seasons.

So I suppose you can say the onus is on the big fellas up front to man-up and start performing at a level that Clemson football used to expect every year. Those “Big Uglies” have got to start blocking somebody if we are going to get over the hump and be a championship team.

While the sexy storylines this fall camp have centered on Kyle Parker and Willy Korn, how many carries CJ Spiller will get, and what kind of impact the tight ends are going to have, the bottom line is that all of those things don’t matter if Clemson’s offensive line can’t block good football teams.

Dabo Swinney has spoken at length about changing the culture of this football program. He needs to look no further than up front on the offensive line.

It’s time to block somebody.