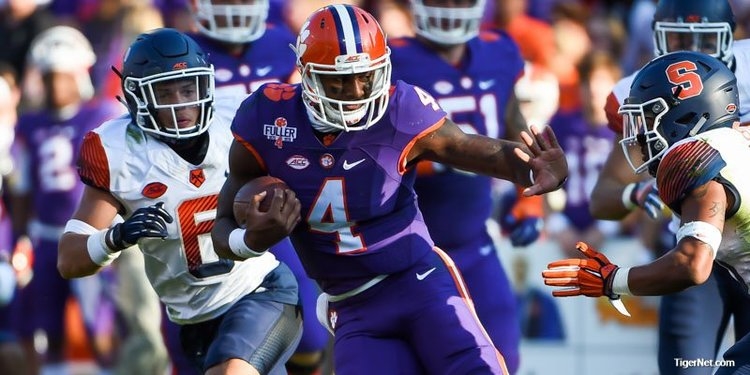 Clemson coach Dabo Swinney spoke to reporters during his weekly press conference on Tuesday and shared injury news on several players on the #2 ranked football team.

"Jake Fruhmorgen is still day-to-day", Swinney said. Ray-Ray McCloud looked good last night. He bounced around well. It was good to see him moving around like he was. He's not quite 100-percent. Same thing with Deshaun. We have a good plan in place for how we're going to practice him this week. We'll keep moving forward with that.”

Swinney had encouraging injury news on defensive back Marcus Edmond.

"Yes. Same thing as Ray-Ray," Swinney said. "We were fortunate to get through the game and not have to play him. It's one of those lingering things. The fact that we were able to hold him was big."

Swinney also said during Sunday's teleconference that no MRI is expected for Watson on his right shoulder.

"I think they have already checked everything," Swinney said. "Just a matter of him getting back in there and rolling. He was ready to go in the second half, but fortunately, we were able to hold him."

Watson had an impressive 13-yard run late in the second quarter against Syracuse. However, he stayed in one more play, and then Watson left the game holding his shoulder. He finished the game with 13-for-16 passing for 169 yards and two passing touchdowns while also having seven rushes for 39 yards and a rushing score. He said that he had ice on his shoulder for precautionary measures after he left the game but felt no pain.