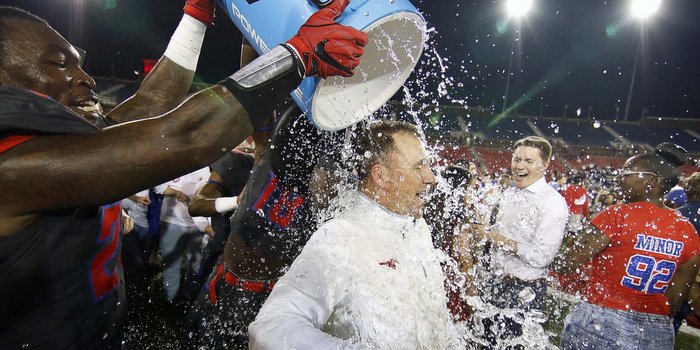 Morris gets a Gatorade bath after the win over Houston (Photo by Ray Carlin, USA Today)

Morris, in his second year at SMU after spending four years as the offensive coordinator at Clemson, has the Mustangs in bowl contention with a 3-4 record (1-2 American Athletic Conference), but the Cougars became the highest-ranked team SMU has defeated since the 1983 Cotton Bowl when No. 4 SMU defeated No. 6 Pittsburgh - led by Dan Marino.

During an interview on College Sports Today (Sirius XM) with Mark Packer and Robert Smith on Tuesday, Morris said one of the first text messages he received was from Dabo Swinney.

"I always enjoyed sitting down during my time at Clemson and talking with you (Packer) about the culture and the direction of that program and what Coach Swinney has done," Morris said. "I’m proud of those guys. That was one of the first text messages I got the other night. I had 319, by the way, and one of the first was Coach Swinney. He was just so proud, and it just tells you what kind of man he is. I have so much respect for him and Kathleen."

Just like Swinney, Morris and his team danced in the postgame locker room celebration, but Morris said his dance moves need a little help. 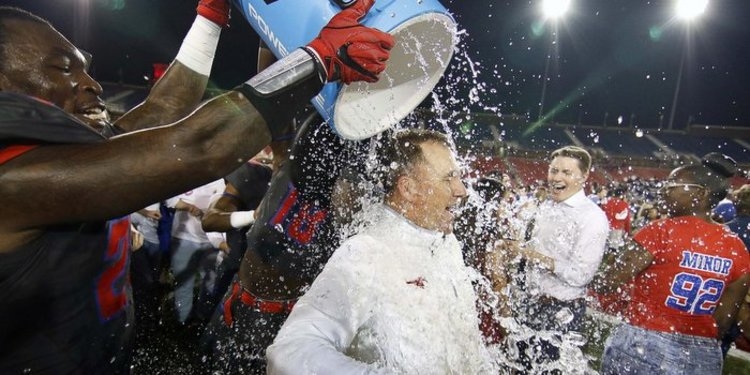 Morris gets a Gatorade bath after the win over Houston (Photo by Ray Carlin, USA Today)"

"You know what? Yeah, there was, actually (some dancing). There was a whole lot of dancing going on by our players and me," Morris said. "My wife, Paula, says, ‘You really need some help.’ I don’t think I’m quite the dancer Dabo is. He’s got a little bit more, but absolutely there was dancing. It was very important that our players see us celebrate."

The Mustangs need three victories to become bowl eligible and have matched their win total of the last two seasons combined. They play this Saturday at Tulane.

Wanna know what it's like after a big #PonyUpTempo win with @coachchadmorris? Head over to Snapchat: SMU_FB to find out!

If ur not 1 of the 100s of people, added SMU_FB on Snapchat last night, you're missing out on moments like this & more. #PonyUpTempo pic.twitter.com/6HhpEdI261