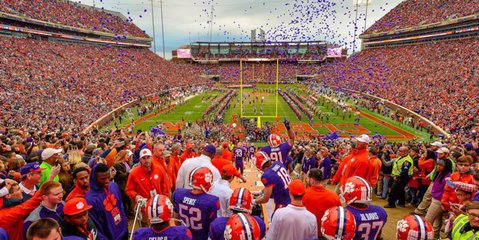 Clemson had a plan in place the last two seasons to phase out the balloon release.

Clemson University released a statement Saturday regarding a TigerNet report on balloon releases no longer being a part of Clemson football gamedays.

The tradition of releasing balloons as Clemson runs down The Hill stretches back several decades, but in recent years the practice had been revisited. Per a Clemson spokesman, a plan had already been in place to reduce the number of balloons by half in 2017 and then to no longer release balloons starting this season.

The spokesman said in an email that they came to the decision after discussions with campus groups and that there had been a recommendation several years ago from a Clemson University Commission on Sustainability to review the practice of releasing balloons before football games.

"While there have been numerous games in the past several years at which balloons were not released (mainly due to weather), campus officials have worked closely with athletics and Central Spirit to determine future plans surrounding the gameday experience as an alternative to balloons," a Clemson spokesman said in the release. "The university and athletics are also discussing new gameday responsibilities for students in Central Spirit who have previously been involved in filling balloons with helium prior to games."

The year 1983 was a seminal year for the balloon tradition, where Clemson students looked to break a Guinness Book of World Records mark for a balloon launch, and according to ClemsonTigers.com, 363,729 balloons ascended into the sky that day.

The Clemson balloon tradition had drawn criticism over the years for environmental reasons, sparking social media protests and online petitions in recent years.