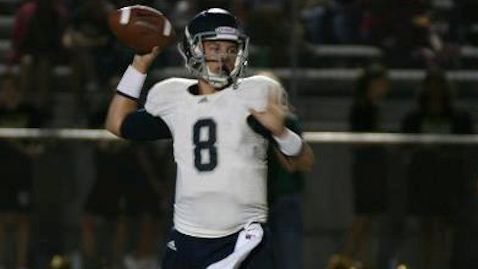 Tucker Israel
Quarterback
6-1, 195
Orlando, FL
View Full Profile long to figure out where he wanted to play his college football.

Chad Morris
Offensive Coordinator / QBs
View Full Profile offered the Orlando (FL) Lake Nona pro-style quarterback on January 17th, and after a trip up for Clemson’s Junior Day this past weekend, the 3-star prospect knew that Clemson was the place for him.

“I felt like I had made up my mind about what I wanted to do and where I wanted to spend the next four years of my life,” Israel told TigerNet Tuesday night. “I felt that that place was at Clemson and there was no doubt in my mind.”

Israel already knew what to expect from his trip, but Clemson and the coaching staff exceeded those expectations.

“I was going up there based on what everyone else was saying about it and they were all great things and I went up there and visited and it was everything that everyone said it was,” Israel said. “I was excited about the program that Clemson has, the family aspect of what they offer as a team. I felt like that was the right fit for me.”

The 6-0, 180 pound prospect made up his mind Monday night and called head coach Dabo Swinney

Dabo Swinney
Head Coach
View Full Profile and Morris to inform them of his decision; however the two coaches were hesitant to accept his commitment without first talking to his family.

“I didn't travel with my parents on this trip. I came with my coach and his son,” Israel said. “They [Swinney and Morris] said they really wanted to meet my mom and my dad for the first time, but they realized how serious I am about this. They said, 'you know what, we can wait to meet your parents before we do this or if you want to do this over the phone, go ahead.' Mostly they were talking to my parents and trying to build a relationship with them. That was mainly what Coach Morris and Coach Swinney were doing most of the night, since I already had a pretty close relationship with them.”

Israel said that after learning of the offer from Morris, he already had an idea that Clemson might just be his next home.

“What Coach Morris was telling me the other day is that they got back into meeting Monday morning and they watched all of the videos of recruits that were on the board and they kept going back to me,” he said. “They thought they really wanted me and they want me to be their guy. I know that I'm going to a place where I'm going to be loved and have a family.”

Israel had offers from Cincinnati, Florida, Wake Forest and a handful of smaller schools, but he was still relatively unknown; however, he said if you want to know about his playing style, look no further than the quarterback of the Super Bowl Champion Seattle Seahawks.

“I like to play as myself and play for God. I have great faith and believe in Him and everything He does for me,” he said. “You can go with the whole Russell Wilson type, since he is the hot name. I'm not the tallest guy, but I can make plays with my feet and extend the play and make every throw there is to make. I think that's what I do best.”

As a junior, Israel passed for 3,979 yards and 40 touchdowns and 10 interceptions.

During his sophomore season, Israel passed for 3,685 yards, 36 touchdowns and 8 interceptions.