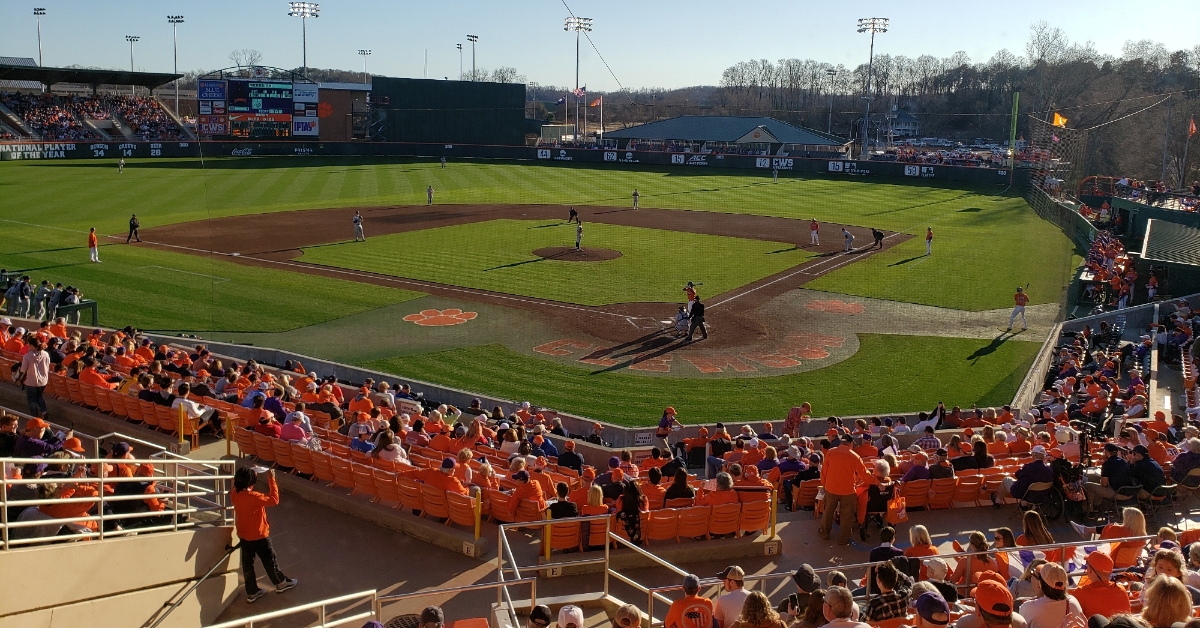 Clemson baseball swept Liberty this past weekend, and the weather Friday was gorgeous

If you were fortunate enough to be in Clemson this past weekend, you saw a reminder of why there is something special in these hills.

Friday dawned clear and relatively warm, and the sunshine was a welcome relief from the rain and snow the area experienced in the previous six days. Nikki had to work her usual hours in Martin Hall Friday, but I took Eli, our 16-month old, for a visit with a bouquet of flowers for his mother. He marched into her office, as proud as he could be, and spent time throwing a small football with Andy Campbell in Registration Services before heading outside.

Like any toddler, he is fascinated with stairs, and there are plenty outside of Martin Hall to try and climb (and fall). He rounded the backside of Martin, saw the North Green looking down towards the amphitheater and Cooper Library, and his eyes widened in delight. And off he went. It took a long time to convince him he needed to get back in the car, but as we rode towards Doug Kingsmore Stadium I thought that they are never too young to learn the joys of a college campus on a beautiful day.

We arrived at Doug Kingsmore and I set up my laptop in the press box and let Eli have his head – he walked up and down the stairs and watched a little bit of batting practice, had a conversation with Pete Yanity (presumably about the Pirates) and somehow coaxed an orange sucker out of Roberta Balliet. As he sat in one of the purple seats near the dugout, slurping the life out of the Tootsie Roll Pop and watching the final swings of batting practice, he was as content as any 16-month old can be.

We walked down towards softball and then I led him back towards the 40 stairs that separate the front gate of baseball from the McFadden lot, and by the time we were done I had a tired toddler on my hands. I handed him off to his mother and proceeded to work the baseball opener. I sat in my usual corner spot, window open, and listened to the cheers from the softball stadium while watching the baseball game (it's neat to see the flashing lights on the light towers at softball when a home run is hit).

As baseball head coach Monte Lee sat down for his postgame interview he looked up and asked us who won the softball game, and when we told him the Tigers won 21-2 in a he broke into a huge smile and then started his postgame press conference by congratulating John Rittman and the softball team.

Saturday was more of the same. The traffic was backed up as people tried to get into softball, track, basketball, and baseball, but it was also amazing to see so many people packed into such a small area for something other than football. Everyone around Clemson loves their football, and football is king. There is no disputing that. But this past weekend was for the other members of the royal court.

Speaking of the court – I had a feeling it was going to be a special day when I was walking in the tunnel at Littlejohn Coliseum and spied actor Bill Murray. One of his sons went to Clemson and another son, Luke Murray, is an assistant under Louisville head coach Chris Mack. Murray was gracious and acquiesced to all picture requests before heading to the floor.

We then watched Clemson trounce the Cardinals, and there were a few things I watched with interest. During the first half, forward Aamir Simms dove to the floor for a loose ball and called a timeout before he could be tied up for a loose ball. After the officials granted the timeout, Brownell ran out on the floor and grabbed Simms and picked him up, patting his star junior on the head and showing the kind of fire we aren’t used to seeing.

I asked Simms about that in postgame and he laughed and said Brownell ripped him for a similar play at Pitt when he didn’t call a timeout. As Simms, still happy from the win, exited the interview room he threw up a peace sign and told everyone he was going to sleep. He ran into Brownell on his way out the door and the two exchanged another laugh.

As Brownell sat down for his postgame interview, I told him that Simms was saying good things about him, and Brownell laughed and said, “He just wants more playing time. He wants more shots.”

All in all, it was a great weekend to be in Clemson. As I packed up in the baseball press box and prepared to head home, I noticed Nikki pull in the baseball parking lot. I opened the back door and Eli smiled and pointed at the big white baseballs that sit in the circle outside the front gate. He was amazed by those baseballs Friday, and it was obvious he was ready to get back out and play.

Sorry, kid, the playing will have to wait a few more days. In the meantime, let’s just enjoy the weekend that was.