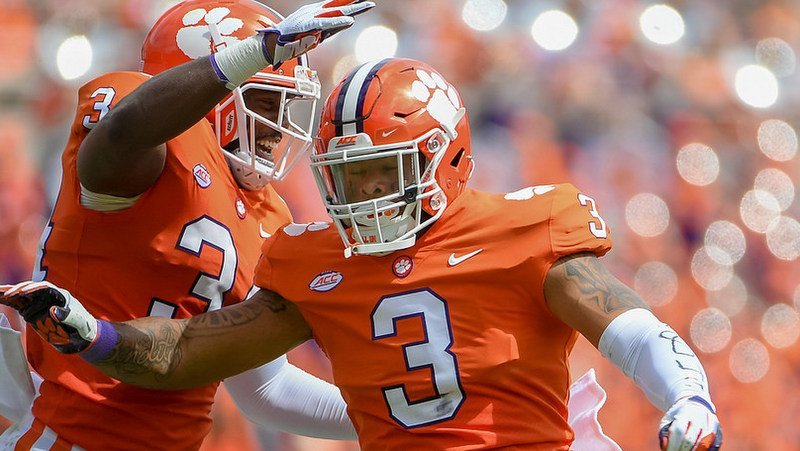 CLEMSON – Xavier Thomas has already made an impact on the field, driven by the hate once shown to him by people in his own state and the desire to perform well in front of his father.

The former 5-star prospect enrolled at Clemson in January, hoping to get an early start on playing time with Clemson’s highly-regarded defensive line, and he’s appeared in all three games the Tigers have played this season. That includes crunch-time play at Texas A&M in the second game of the season and recording his first collegiate sack this past weekend against Georgia Southern.

“It felt great. It felt like it was in slow motion, like it took me forever to get to him and get him down on the ground,” Thomas told the media Monday. “But it felt great. And then I got to celebrate with my teammates.”

Thomas showed his athleticism against Texas A&M when he peeled back in a zone blitz to cover the running back coming out of the backfield. Thomas drew a penalty flag for interference but says his teammates haven’t given him too much grief for the flag.

“They all were actually congratulating me because I was put in a very tough situation. I was actually put in to rush the quarterback, but we changed into a call where I had to cover the running back,” Thomas said. “Usually, a running back just goes out to the side, but this running back went straight up the field, so it was a pretty tough situation. I was told I covered him pretty well, but it was a poorly thrown ball. Clelin Ferrell has tried to mess with me and tell me I had bad coverage but it was actually good."

Thomas said each game and each practice have been a learning experience, and his first “welcome to college” moment came during fall camp.

“In the early part of fall camp, when we had pads, I would always play full speed,” he said. “But there would be times when I wasn't doing my job correctly, and in high school, you could not do your job and still make plays. It doesn't work like that on this level. You have to do your job and your job only. That is when I learned. If I messed up a play Coach V (defensive coordinator Brent Venables) kinda got in my behind.”

Taking heat from the fiery Venables was nothing new for Thomas – he took plenty of heat during the recruiting process.

“I am not going to say it was nice, but it was ok. It is what comes with it,” Thomas said. “I would say it was pretty fun with the recruiting process, with all of those people guessing where you would go. But it was also great to commit early here and get all of that out of the way.”

One South Carolina fan took it too far after Thomas announced his decision to attend Clemson. Thomas said the vitriol from Gamecock fans caught him off guard.

“I was a little bit surprised. I knew I was going to get hate from it, but I didn't know I was going to get all that I did,” Thomas said. “There were some people that said some pretty hateful and hurtful things. I remember one tweet I saw was where someone said they hoped I tore my ACL. That was kind of surprising.”

One plus for Thomas is having his father back in his life. Ezra Thomas was released from prison in January and is now able to be a part of his son’s life, on and off the field.

“My dad is here and my family is here, they came up here from Florence for the hurricane,” Thomas said. “He works at a car company in Florence. It's been great. Great to have him finally see me playing football in person. He's been able to see the newspaper and reports and all that, but it's been great to have him see me play in person. It's very different and great having my dad around.”

@atxlete damn I hate that you didn't come to USC. But I wish you the best of luck. In tearing your ACL and having a career ending injury