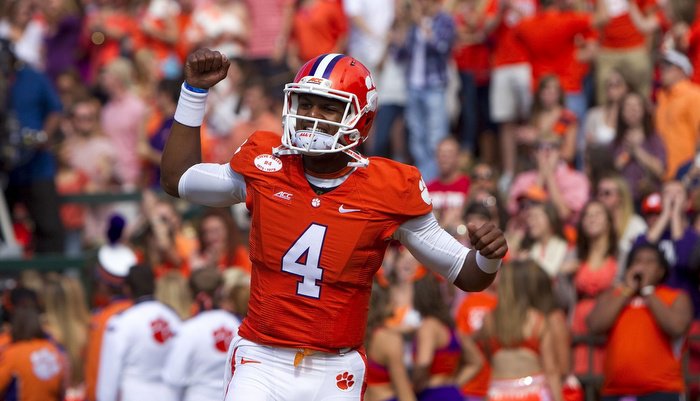 Teams all across the country this season hope that they, too, can pull a Clemson. At the end of the year, they will want to say they “Clemsoned.”

The news broke early Thursday, Clemson was ranked 12th in the preseason USA Today Coaches poll. The Tigers’ ranking in the poll marks the fourth straight year Clemson has been ranked in the USA Today preseason poll, and the Clemson program is the only one in the nation to finish higher in the final poll than its preseason ranking each of the last four years.

Yes. You read that right. Clemson is the only program in the nation over the last four seasons that have seen a higher ranking in the final poll than they had in the initial poll. That’s the consistency that head coach Dabo Swinney

Dabo Swinney
Head Coach
View Full Profile has been looking for. But it also shows that the Tigers – who have had high expectations in each of those seasons – have exceeded many of those expectations.

According to Clemson Football Sports Information Director Tim Bourret, the Tigers are coming off a 10-3 season in which they finished 15th in the final USA Today and Associated Press rankings. Clemson has been ranked in the final top 25 by USA Today Coaches Poll each of the last four years, joining Alabama, Oregon and Florida State as the only programs that can make that claim. That includes a top 15 ranking for Clemson each of the last three years.

Clemson was also the preseason pick to win the Atlantic Coast Conference title according to the media attending the ACC Football Kickoff at Pinehurst, N.C. earlier this month. The Tigers return just five starters on offense and three starters on defense from last year’s team that concluded the season with wins over South Carolina and Oklahoma by at least two touchdowns.

Clemson’s success in meeting or exceeding expectations doesn’t end there. As Swinney likes to point out, the Tigers have won 27 consecutive games over unranked opponents. That is the longest streak of its kind in school history, and all 27 of those wins have been by four or more points, which is the longest streak in the nation. Alabama has the edge with 54 consecutive wins over unranked foes, regardless of the score. Clemson’s last loss versus an unranked team was back in 2011 when the Tigers lost 37-13 at N.C. State.

Over the last four seasons, Clemson has a 42-11 record, which is tied for the seventh most wins among FBS schools during that span. Clemson has had four straight seasons of at least ten wins for just the second time in school history. Clemson also joins Alabama, Oregon, and Northern Illinois as the only schools that can make that claim. No current roster member has ever lost to a team ranked outside of the Top 10.

It has been a record-setting four seasons at Clemson. That’s all well and good, and it’s been an exciting run to be sure. But here is the good news – it’s just getting started. Clemson has talent all over the roster, recruiting is going gangbusters and construction on some of the new facilities will be completed before the season opener, while the new football operations center will be done in a few years.

Forget that other word that ended in “ing.” Clemsoned is now a thing. Pulling a Clemson is now a thing. It means you meet or exceed expectations on the field while providing excellence in the classroom. The Tigers are ranked 12th this preseason, so if the previous four years are any indication the final ranking will be higher, especially if they Pull a Clemson.

Spot the ball and let’s find out.