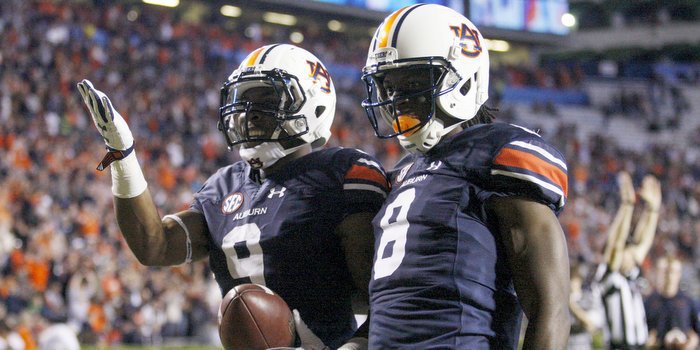 Clemson will face a tough environment at Auburn (Photo by John Reed, USAT)

CLEMSON – If Clemson is to defeat Auburn Saturday night in the season opener, the Tigers will have to deal with Auburn’s loud and hostile crowd.

Jeff Scott thinks the Tigers have the focus to accomplish that.

“Game week is finally here I think our guys are excited. It's been a long fall camp but a really good fall camp,” Scott said Monday in the WestZone. “I know we've been counting down the days to get to the opener. I think our guys had a really good work ethic at practice - really good focus this past month. Really excited for the opportunity to go out and compete against Auburn. It will be a great challenge on the road at their place. It will be a hostile environment and we're going to have to play well to win the game.

“Our guys know that. They've got a great coaching staff and we've got a lot of respect for them over there. We've visited with them in the past and we know their coaches well. They've got a very talented roster. They've recruited extremely well over the last four or five years. We've gone head to head for several guys that are on their roster. We know they're very talented.”

“Defensively, it will be one of the top defensive fronts that we play all year starting with Carl Lawson. I think he's a premier defensive end,” Scott said. “I know he's been injured and is back full speed and healthy. He'll be one of top d-ends that we play against all year. Montravious Adams in the middle is another guy that we recruited very heavily. He's very disruptive inside, so we've got to have a plan for them. They've got a few returners on the back end - Rudy Ford was their leading tackler last year and played safety and nickel/sam. Carlton Davis led the team with three interceptions last year as a freshman. We're looking forward to the challenge and ready to get started with the season”

Clemson will have to deal with the challenges of playing on the road.

“The noise is number one. None of these guys were on our team the last time we went down and played at Auburn,” Scott said. “It was very loud. You're always worried about the pre-snap procedure and communication in the very first game of the season. That's something as coaches you're always concerned with, but when you're on the road in a hostile environment, I think it magnifies that even more, so that's something we've been really working hard on during fall camp. We'll have plenty of noise out there this week while our offense is practicing.”

Playing on the road is never easy, but it gets even tougher when playing at a place like Auburn.

“It's probably one of the biggest things that we're concerned with. We do have a lot of guys that have played and been in those types of environments and those types of games, but we're also going to have some out there who have not had a lot of experience with that,” Scott said. “This will be their first time. It all goes back to what Coach Swinney talks about all of the time - it's about Clemson and it's about our preparation and our focus and if we can go out and execute our gameplan, then we're going to have a chance to have success.

“The external factors, you have to know what they are and be prepared for them, but you can't let that be your focus. You really have to get locked in and focused on doing your job no matter where you're playing, what the environment is, how loud it is, if it's raining or sunshine, day or night. We have to eliminate the external factors having a direct impact on our production. It's easier said than done, but it's something that our guys believe in and that's why you practice every day. It's why we've put them in some tough situations already in fall camp and we'll continue to put them in some tough situations as we finish up our game prep this week.”

“That's one of the many positive traits that Deshaun has - his demeanor is the same every day. He never gets rattled. He never gets too high with highs and never gets too low with the lows. I think he has a quiet confidence when he steps into that huddle and it's contagious to all of the players. I think there is definitely that feeling that we've got guys who have been in these types of battles before and there are some positive things that you can bring from that, but at the same time it's a new day, a new year, a new game and now we have to go out and execute. That's where our guys' focus is. It's definitely an advantage to have a veteran quarterback like Deshaun.”

At the end of the night, however, the team that makes the fewest mistakes will probably come away with a victory.

“There's less room for error when you're playing a talented team like Auburn on the road, there's no question about it. There's been a lot of Clemson teams go down to Auburn and leave with a loss and not many of them have gone down there and gotten a win,” Scott said. “I think our guys know exactly what they're stepping into. There's not going to be any surprises or anything like that. Our players and coaches have a lot of respect for Auburn. We know we're going to have to play well to win the game. We're not going to be able to go out and have a bunch of mistakes and not play well and come out with a win. We're definitely going to have to play well to be able to win the game Saturday night.”