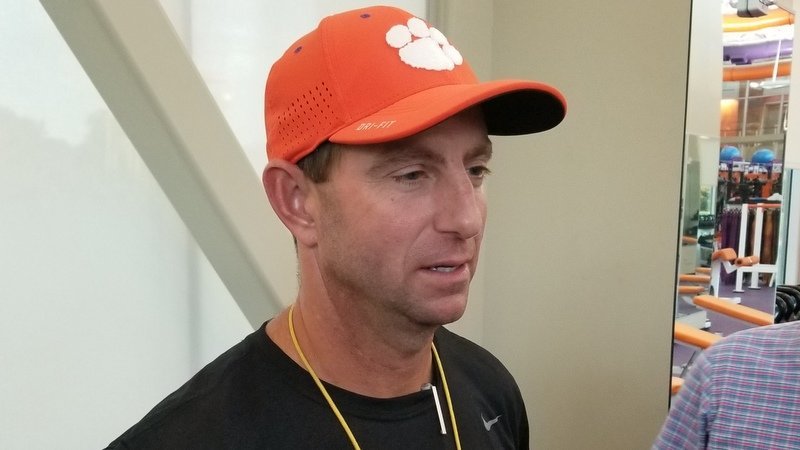 CLEMSON – No. 3 Clemson faces a big test Saturday in Death Valley, but head coach Dabo Swinney says the Tigers aren’t feeling any pressure. Why? Because like any good student, they’ve prepared for what he calls a special moment.

Swinney met with the media following Wednesday’s practice, and he said the Tigers have had a good week of practice.

“We are excited to get back going. We've had a good week of practice and guys are ready for the opportunity, ready for the game to get here,” Swinney said. “It's going to be a great matchup and I know there will be a lot of excitement with our fans. Tomorrow is Thursday, and it seems like the week has gone by pretty fast since we came back and got back it.”

Swinney the team has done a good job of not getting caught in the hoopla that surrounds a big game.

“Maybe it just that we are creatures of habit around here. They are young people and they are very in tune with who we play and all that stuff for sure,” he said. “But I think that is just a big part of our culture. Our guys do a great job - our leaders - of not letting guys make one game bigger than the other and things like that. We are prepared. And part of that, too, is that we don't change anything. It doesn't matter if we are playing Furman or NC State, who is undefeated, we don't prepare any different. We prepare the exact same. I think part of our consistency is a result of that and we develop a mindset in these guys.

“Even with all of that, they are very much aware of where we are in the season. It is game seven and this is the third quarter of the season. There are only five undefeated teams left in the Power Five and two of them are playing each other. They get it and I think they enjoy playing in these types of games for sure, but I think they enjoy in playing in all of them. Everybody is excited because this is the moment we are in and it's a special moment.”

“There is no pressure when you are committed and prepared. What is the worst thing that can happen, that you get beat? If you are prepared and you are committed, then there isn't any pressure,” Swinney said. “If you try and take shortcuts and you maybe aren't as committed as you need to be or should have been then maybe there is a little pressure. I think all of us can understand that. We've all been in school and we've all taken a test. You know those days when you walk in there and you're like, 'Give me that test.' You haven't seen the test but you know you were prepared and you enjoy the moment because you put the work in.

“And then we've also probably all in our academic careers, somewhere along the line, haven't prepared like you needed to and there is a lot of pressure on you and a lot of anxiety on you because you should have studied more. So pressure is self-induced. You can control all of that. Emotion is a part of the game, but we have a committed football team and they are preparing really well and we're ready to go play the game.”