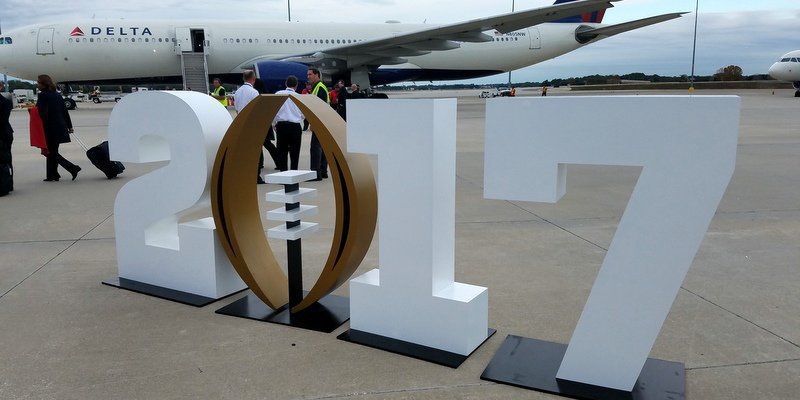 TAMPA, FL – The Clemson Tigers have arrived, but they aren’t happy just being in Tampa. They want to finish the deal.

The game will be played at Tampa’s Raymond James Stadium and will kick off a little after 8 p.m. The game will be televised on ESPN. Alabama defeated Clemson 45-40 last season in Arizona for the title, but Clemson’s second consecutive trip to the title game have many believing the Tigers (13-1) have an even better shot at winning the crown this season.

Swinney was one of the first people off the plane, and he quickly reminded the media that the task ahead is a daunting one.

“Last time I checked we're still playing Alabama. I don't think it gets any easier, that's for sure. We've had great preparation. We had great preparation last year,” Swinney said. “I think the amount of time is the same for both teams. The tougher part is getting ready for that bowl game, I think. That one is a lot of time, but this one is much more like a game week, although we have 14 games to study. It's great to be here in Tampa. The weather is a little better here right now (than at home). We're ready to get it on Monday night.”

Swinney says the fact the Tigers are back shows how far the program has advanced in the last few seasons.

“I guess the last 29 games we're 27-2 and Alabama is 28-1. The two best teams are here. I don't think there's any question about that. They've been the standard in college football,” Swinney said. "Everybody has kind of been trying to catch up with them for a while. For us, I think it just says we've become an incredibly consistent program. We compete at the highest level. We're not just happy being here. We want to finish the deal. It's not an easy task and we all know that. This is a team that's won 26 in a row. We've got a lot of work to do. All you can ask for is an opportunity and we've got that, so now we're going to do everything we can to get the result we want.”

He does think the Tigers have learned from last year’s experience but doesn’t expect that to have any effect on the outcome of the game.

“I think every year helps you as far as to learn from your experience. We’ve got a lot of guys that were here last year and I definitely think that helps, but it doesn't really have anything to do with the game,” Swinney said. “It really doesn't. It's about these four quarters. These two teams are going to play their hearts out, there's no doubt about that. We'll be a little smarter and we can make those three or four plays that they made last year.

“It's exciting. It's a blessing. Just try to have some quiet time today to thank the good Lord for letting us be here. It's an unbelievable journey for me, especially growing up in Alabama. Just being in the national championship and who we're playing, it's pretty special. I'm excited for the players to be able to enjoy it and the staff for how hard they've worked to get to this point.”

What would winning a National Championship mean for the Tigers?

“It would mean a ton. It's the next step for us. It's the only thing we haven't done. It would kind of complete the circle for us. I think if you can do it once you can do it again,” Swinney said. “For us, I know it happened a long time ago in 1981, but for our group and our program everything we've done once, we've done multiple times. I think somewhere along the line we're going to get it done and I hope it's this trip and this time around. We have a great champion that we have to go through. That's the way it should be. I wouldn't want it any other way.”

With just a few days remaining before the big game, Swinney thinks his team is dialed in.

“I've seen it all year. These guys have been focused since day one last spring. Now that we're here, they all know it's all over Tuesday. When I have my team meeting next Thursday, it will be a new team, new challenge, new journey, new schedule,” he said. “We just want to finish with no regrets and everybody is committed to doing that and if we do that we can live with the result.

“I'm really pleased with how we've played down the stretch. I think that part of it is better than last year. Even though we lost a game, I think we finished better than we did last year. We're healthier. We're a deeper team than were last year from a competitive standpoint. I think we're in a good spot and hope we play our best four quarters Monday night.”