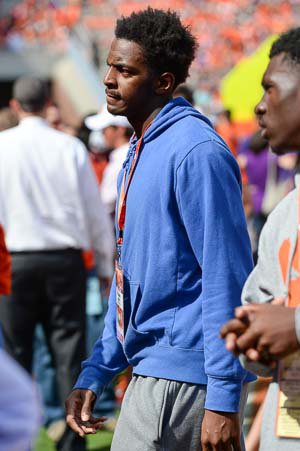 Dabo Swinney
Head Coach
View Full Profile didn’t have time to finish celebrating his 50th career win before it was time to celebrate a new member of the 2015 recruiting class.

View Full Profile pulled Clemson’s head coach to the side in the locker room after the Tigers 52-6 win over the Citadel to officially commit, becoming the Tigers third commitment for the 2015 recruiting cycle.

The four-star prospect told TigerNet that he couldn’t wait to tell Swinney the news, and decided to make his decision known during Clemson’s postgame celebration.

“In the locker room, I pulled him off the side and I was like, ‘Hey, can we talk?’ I just told him what I wanted to do,” Bell told TigerNet Saturday evening. “He asked me if it’s what I really I wanted and I told him yes.”

After much thought and knowing that Clemson was the place that he wanted to play his college football, Bell said that the time was right to pull the trigger.

“Well, I’ve been thinking about for the last week. I just wanted to get up to the last home game and make that decision,” Bell said. “From the offense to the school and the atmosphere, I’ve always really liked Clemson. That’s where I’ve always wanted to go. I just decided to go ahead and pull the trigger. I just told Coach Swinney about it and he was excited.”

Chad Morris
Offensive Coordinator / QBs
View Full Profile ’ style of offense, Clemson’s location and their knack for putting skill players in the NFL were all factors that led to the 6-3, 200-pound receiver to choose the Tigers.

“Running three or more receivers on the field at one time is what I really like to play with,” Bell said. “I like to get the ball down field. I just like Clemson overall. It’s still in the southeast. I like the offense and I like how they move players on to the NFL.”

Bell has attended two games in Death Valley and said that both experiences have been amazing.

“It was amazing. I’ve been to two games.” Bell said. “I came to the Wake Forest game and I was there for this game against The Citadel. It was pretty awesome. Everyone was nice.”

As a junior, Bell caught six touchdowns and accounted for over 300 receiving yards, but he said that he isn’t afraid of catching the ball in traffic.

“I’m a big target. I will catch the ball in traffic,” Bell said. “I have a lot of speed and I won’t let one man tackle me. I just want to score touchdowns.”

Check out his football highlights here