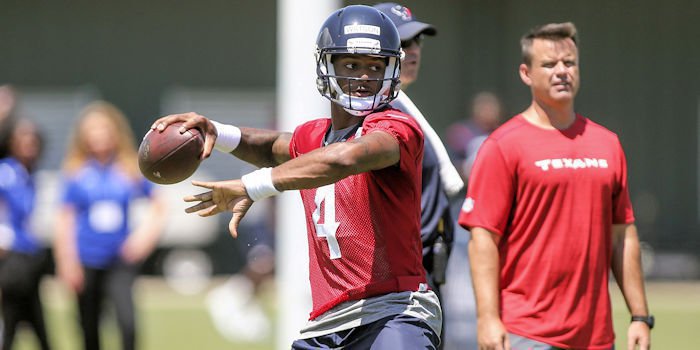 Watson during OTA's with the Texans

Deshaun Watson was given plenty of responsibility as Clemson’s starting quarterback, tasked with reading the defense, making audibles when necessary and helping the center with offensive line adjustments. He did most of his work with Clemson’s hurry-up offense at full throttle, and those lessons learned are serving him well in the NFL.

Watson was chosen by the Houston Texans with the No. 12 overall pick in the first round of the NFL Draft, and he will battle Tom Savage for the starting spot once camp starts in July. However, Watson has already caught the eye of Texans’ head coach Bill O’Brien, and O’Brien says Watson is reaping the benefits of his Clemson training.

“He had to learn a pretty sophisticated offense at Clemson,” O’Brien said. “He had to do a lot of things at the line of scrimmage. I think he was trained really well. That's a credit to the Clemson staff.”

The Texans’ head coach says Watson is “wise beyond his years.” That’s something Clemson fans and coaches already knew.

"He's a very poised guy," O'Brien said, via the Houston Chronicle. "I like the way he carries himself. I like the way he operates. He's a rookie, and he's not nearly where he needs to be to be a full-time starter in this league, but you can tell he's got a lot of qualities you like.

"For being a rookie, he's wise beyond his years. He asks great questions in the morning meeting, and you can tell he's studied the night before. Every practice isn't perfect. He knows he needs to get a lot better. And he did get better every day during the spring. It's no pads, of course. It's not real football, but he did improve in his knowledge of the offense."

Watson during OTA's with the Texans "

O’Brien said the rookie handled everything thrown his way during the spring.

"We put a lot on his plate during the spring, and he handled it very well," O'Brien said. "He made mistakes, and he corrected them. You don't see him make the same mistake twice. He can do a lot of things. He can operate our running game and in our passing game. He's got a lot of athleticism. I don't think we'll have to limit him. Training camp and preseason games will be a big test."

Watson’s ability to process information is what led the Texans to move up in the draft and take the Gainesville native.

“One of the things that impressed us the most was his ability to retain information with poise. We do several different things with our conversations with our quarterbacks. He handled it all very well. That impressed us.