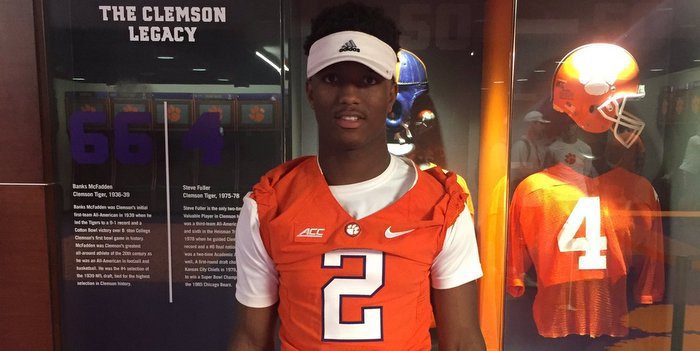 So much so that the Tigers on Monday handed the Volunteer State cornerback – a rising junior at Baylor School in Chattanooga – his first official athletic scholarship offer. (Shortly afterward, the Tigers of LSU followed suit.)

But the offer didn't exactly “wow” Harris – he knew he'd made a strong impression.

But to say he wasn't surprised is not to say he wasn't gratified. “Beyond blessed to have received an offer from Clemson University,” he tweeted Monday, followed by the hashtags “#ALLIN,” “DBU” and “WE2DEEEP18” – and, for good measure, a couple of Tiger emojis.

Harris told TigerNet that Dan Brooks and Mike Reed have been the Clemson coaches primarily involved in his recruitment. He said that because of his stature – 6-foot-2 and growing – he could end up playing free safety.

During his sophomore season, the standout defender accounted for four touchdowns, two on interception returns and the other two on kickoff returns.

“I want to be a very tenacious but smart player,” he said of his approach to the game. "Every play, you have to have a plan before the snap, and as you go through you want to execute that plan.”

Harris said he hopes to concentrate on health sciences in college, in preparation for a career in the medical profession, perhaps as a physician's assistant or a pharmacist. And though 2018 is still a couple of seasons away and he's yet to compile a list of choice universities, he said Clemson would have to be near the top of that list – if there were such a list.

“Well, considering they were in the national championship last year and they have one of the best programs in the country, of course they would be at the top of the list, but I haven't made one yet,” he said.

He listed former Clemson cornerback Mackensie Alexander, a recent second-round pick of the Minnesota Vikings, as the Tiger he most enjoyed watching on the field. And he added that the recent rise of the Clemson program is no big surprise, either.

“That just goes to show how much effort – you can just see on TV or just anywhere how much they love the game and how much time and effort they put into it,” Harris said. “That they're not just out there for fun – they have a goal to accomplish, and they want to accomplish that goal.”

Baylor made it to the TSSAA Division II AA semifinal during Harris' freshman and sophomore seasons. The goal for this fall, he said, is for the Red Raiders to bring home a state championship.

Harris said he plans to return for an official visit later while taking in a football game in Death Valley.

“I talked to coach Dan Brooks (about attending a Clemson game), and they said I'd definitely love the atmosphere,” he said.

Following Harris' announcement of his Clemson offer, South Carolina on Tuesday morning extended him an offer as well, although Harris said that was the first contact he has had with Gamecocks coach Will Muschamp's staff.

Beyond blessed to have received an offer from Clemson University #ALLIN #DBU #WE2DEEP18 ???????? pic.twitter.com/WeIYsK3WQ3