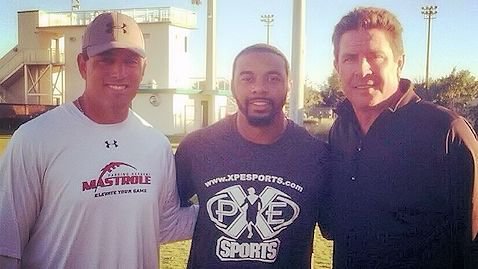 Any young quarterback who wants to make it in the NFL would be wise to take the advice of a Hall of Famer, and that’s exactly what former Clemson quarterback Tajh Boyd

The meeting took place thanks to quarterback coach and guru Ken Mastrole, who has been working with Boyd in preparation for the NFL Combine and the NFL Draft. Mastrole, who runs the Mastrole Passing Academy in Florida, said Boyd came to him based on the recommendation of E.J. Manuel, the current Buffalo Bills quarterback who hails from the same area as Boyd.

“I knew Tajh was going through the whole draft process and trying to figure out a quarterback coach to select,” Mastrole told TigerNet this week. “I saw where he had talked to E.J. Manuel in the past, and I set up a meeting with Tajh. He interviewed me and I told him about my program and told him about the nuts and bolts of it and what is has to offer, and we started working together.”

However, before Boyd met with Marino, Mastrole put him to work out on the practice field and he liked what he saw out of the former Tiger.

He also found things that Boyd needed to work on.

“That kid has a very live arm,” he said. “I’ve watched tape on all of the quarterbacks that are coming out this year, and I would put his arm strength with any of them. I know at Clemson they do a good job of getting the ball out quickly, but in the NFL you are doing more of the seven-step dropback, the five-step dropback and the under center type of play. So we really tried to hone in on drops and the set-up.

“What I am trying to hone in are the longer-developing routes –where he has to sit back and read the defense and maybe move around a little bit. More of the specific things that he can take to the NFL level so he can make a lot of the throws required by teams. And we worked on some of the finer details, and worked on his mechanical breakdowns and the X’s and O’s and what the general managers will ask him.”

Once they laid the groundwork, Mastrole brought in two former NFL players to help mentor Boyd.

“I brought in a former teammate of mine, Jim Miller, who played 12 years in the league,” he said. “I brought him in to do a little mentoring, and then I brought in Dan Marino. It was a great experience to bring him around Tajh. So we put him around good people who have been there and walked that path, just so it would make the transition experience a little bit easier. That way, he would know what to expect and how to prepare.”

Mastrole said Boyd has been a willing pupil, and he loves what he has seen.

“We worked on him not getting so much weight on that front foot,” Mastrole said. “The benefits of that – Tajh can throw from any angle. He can throw from many different entry points. He could almost underhand it. His strengths are he is just a great athlete, and he can deliver the ball down the field on time in really tight windows.”

He then said that Boyd will be a benefit to an NFL franchise, both on and off the field.

“I think they are going to get a great leader. He is a very good locker room guy,”Mastrole said. “You get an exceptional athlete with a live arm who hasn’t even come close to hitting his full potential. Once he gets in the NFL and gets in a system, he will be a great leader and at the end of the day, he is going to be a guy that puts the ball in the endzone. That is what you want. He is a proven winner. I know you get judged on some of the bigger games, but he is a standup guy that is ready to endure the grind. I think Tajh will embrace that and it will only make him a better player at the next level.”