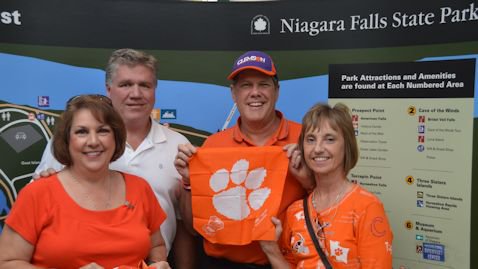 Clemson fans we found at Niagara Falls on Thursday.

SYRACUSE, NY – I know that TigerNet is a Clemson website. I get it. But the Tigers are making their inaugural trip to Syracuse this weekend, adding another location to potential road trips for Clemson fans.

With that in mind, we decided to put together a trip that many Clemson fans would probably like and attempt themselves, so pardon the interruption of the sports coverage while I tell you a little about our trip, and I hope it gives a lot of you some ideas for future trips.

Thursday, we left Charlotte on a 6 a.m. flight for Buffalo, but our flight had a short layover in Detroit before heading on to Buffalo. We finally arrived a little after 11, and found it easy to rent a car because many of the car rental companies are actually on site at the Buffalo airport. We walked straight out of the baggage area and straight to the counter – no bus rides or long walks to the car rental area.

The great thing about a trip like this is that you get to see a lot of Clemson fans, and we ran into on fan in Detroit while waiting for the second flight, and then we ran into an entire group once we de-planed in Buffalo. There was another Clemson fan in line with us at the car rental counter, and we had some great conversations with each one we saw.

Once we had the rental car, it was a little less than a 20-minute trip out to Orchard Park, where we hoped we could get inside Ralph Wilson Stadium, the home of the Buffalo Bills. Unlike many of its NFL counterparts, this stadium lacks glitz and glamour. It’s very easy to get to, and we ran into almost no traffic.

Once you get to the stadium, you can park almost right outside of the gate and walk up. However, we were told that the stadium is currently a “construction zone” and they weren’t allowing anyone inside the gates. We took a few pics of the outside of the stadium and the scoreboard and headed to Niagara Falls.

The trip from Orchard Park to Niagara Falls took about fifty minutes, and if I had it to do over I would have hit the Falls first and then the stadium before heading to Syracuse.

However, we arrived at Niagara, and parked in the main parking lot just outside of the visitor center. The leaves are just beginning to turn up here, and the entire area is very pretty. While we were in the parking lot, we ran into more Clemson fans, including a guy that many TigerNet folks know as DrPaw.

We took the walk around the top of the falls, and then plopped down the $15.50 per person to take the Maid of the Mist boat tour around the bottom of the falls. We only waited about 20 minutes once we picked up our souvenir poncho, and had the premium railing spot on the second deck at the bow of the ship.

There are a lot of great photo opportunities from the moment you leave the dock, and it isn’t too wet to use a camera during the main portion of the trip. However, if you have a nice camera, you might have to put it under your poncho once you reach the outer edges of Horseshoe Falls, which are also known as the Canadian Falls.

Thank goodness for the ponchos – between the water coming off the falls and the whipping wind, we were drenched; however, the trip was well worth it and I would definitely do it again.

We hit a few of the other sites around the falls, and then because of time constraints got back in the car and headed to Syracuse. The trip from the falls to the Cuse took about two-and-a-half hours, and we arrived at our hotel a little after seven. We left Powdersville at three a.m., and 16 hours later we had driven to Charlotte, flown to Detroit, flown to Buffalo, saw Buffalo and Ralph Wilson Stadium, took a Niagara Falls tour and drove to Syracuse. It was a full day.

Friday, we are headed to Cooperstown and the Baseball Hall of Fame, which is about 90 minutes from our hotel. I will let you know about that trip late Friday, and I will hopefully have some info on some of the restaurants we want to try. 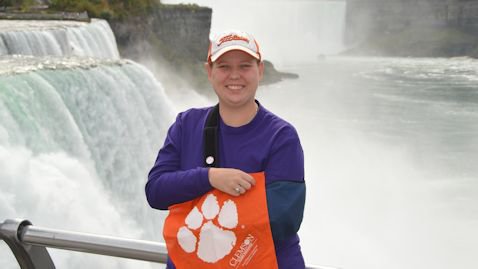