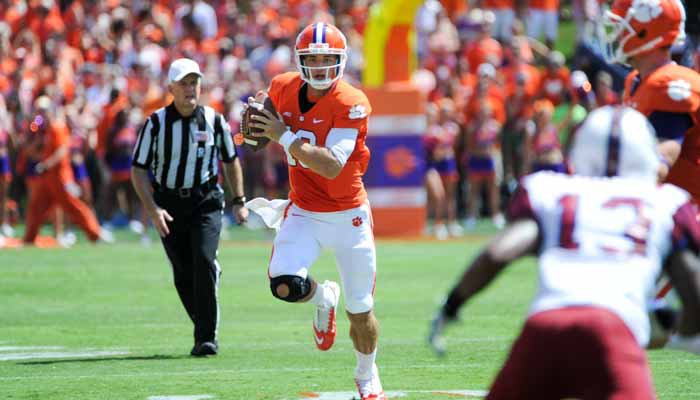 Stoudt passed for 302 yards on Saturday.

Dabo Swinney
Head Coach
View Full Profile ’s postgame press conference began to center on the play of Watson and not Stoudt, Swinney reminded the assembled media that Stoudt was still the starter.

“Give respect to both those guys. Cole Stoudt has earned the right to be the starter,” Swinney said. “He has done nothing to not be the starter. He’s been great. We need to recognize that. Deshaun is exactly what I told y’all he was – special. A special talent, and when he’s had the opportunity to play – he’s played well, outside of one series (at Georgia). That’s what we coach him to do and that’s what we expect him to do. That’s why we recruited him. That’s why we’re playing him. We think he deserves to play and he’s earned it. As long as he continues to play well, you’re going to continue to see him. If somewhere down the road we have a change because somebody decides to be a backup, you deal with it. We’re in a good situation.

Watson was stellar during limited action in Clemson’s 73-7 dismantling of South Carolina St. – he posted a 342.6 quarterback rating, completing 8-of-9 attempts for 154 yards and three scores.

Stoudt was good in his own right, averaging 9.7 yards per pass for 302 yards and another score. However, more than one throw looked as if it was in danger of being picked off and if there isn’t a quarterback controversy in the minds of the coaches, there is one where the fans are concerned.

“I know y’all want a quarterback controversy – (to) start the backup,” Swinney said. “As soon as we make that switch and Deshaun has a bad game – ‘When’s Cole going back in?’ Not getting into that. (Stoudt) has to focus on what he’s doing and that’s exactly what he’s dialed in on. He has played very well. He threw for 302 yards today and all y’all want ask me about is Deshaun – that’s a shame.”

Stoudt calmly answered all of the questions following the win, and he said he’s aware that many fans want to see Watson start sooner rather than later.

“Yeah (I hear it),” Stoudt said, “but I don’t really focus on it. It’s stuff outside the team. Whatever is going on with the team is what’s going on. We don’t need to listen to what others have to say.”

Swinney said that Clemson’s coaches will continue to follow the plan they’ve followed the first two weeks of the season, but reminded everybody in earshot that the coaches won’t hesitate to play the hot hand.