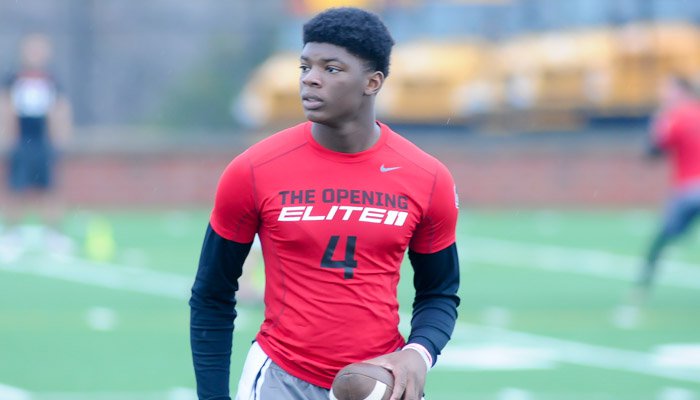 View Full Profile to gain national attention because of his dynamic skill set. It is that same skill set that got Cooper noticed recently by a Super Bowl winning quarterback.

Cooper – who suffered a torn ACL during his junior season – was cleared just days before the Nike event and had only participated in one other competitive event, but his physical tools and skill set were enough for Dilfer to know that he wanted to see more out of the 6-5, 205 pounder.

“He was my sleeper coming in and that's why I talked to him afterwards. I think he's just not right on the knee yet and hasn't probably been training a ton,” Dilfer told TigerNet following The Opening Event in March. “I hope he gets to Charlotte (at the Nike event). I want to see him again and I want a little more hands on time with him, so I'm going to get one of my best coaches to work with him. I think he can be an absolute superstar. I think there are different degrees of readiness in March. He's a guy that's not as ready as some of the other guys were. In my mind, he's a super high ceiling player that we need to give a lot of attention to.”

Before the ACL injury, Cooper threw for 1,200 yards on 83 of 156 passing with six touchdowns during his junior season. As a sophomore, he had 2,200 yards and 23 touchdowns and also rushed for 404 yards and 11 more scores.

However, because of the torn ACL, Cooper hasn’t been able to practice or participate in any competitive workouts, leading him to not fully trust his knee and causing inconsistency in his footwork and throws.

“In his sophomore tape, he did everything well. I was blown away by his sophomore tape,” Dilfer said. “As I told him and his parents - because I'm brutally honest - his best is as good as anybody but his bad is really bad. He was super inconsistent and I think a lot of it was just that he was tentative on his knee, because he would do it the right way once and then he would go back and not do it the right way, which is where you saw the inconsistency. I just don't think he trusts his body right now.”

Dilfer compared Cooper to the University of Tennessee’s junior quarterback Josh Dobbs, who exploded onto the college football scene last season by completing 112-of-177 passes for 1,206 yards and nine touchdowns (seven interceptions), while rushing for 469 yards and eight scores on 104 carries in six games (five starts).

“He has some Josh Dobbs in him. He's probably a more physical version of Josh and Josh didn't make it early on,” Dilfer said. “He went to Dallas and was wildly inconsistent and then we saw him again late in the year and I thought that guy right there is the real deal. I hope it works out for Zerrick that way. He's a high-ceiling guy that I really want to see ascend as the spring goes on.”