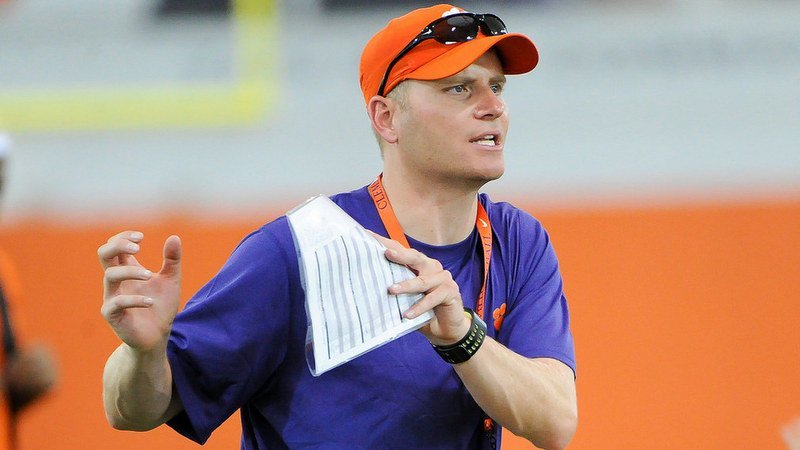 Streeter is looking for the right fit for Clemson

CLEMSON – The Clemson coaching staff believes it will sign 25 players or more in the 2019 recruiting cycle, but they won’t take just any player despite the large class size. They are still looking for the right fit as a player and a person. Why? Because a Clemson offer should mean something.

Clemson signed the nation’s fifth-ranked recruiting class (ESPN) Wednesday despite a smaller class size. The Tigers have 20 seniors on the roster, and after recent transfers have as many as 25 scholarships to dole out. Add in juniors that might leave early, and Clemson could sign more than the allotted 25.

They all have to be the right fit, according to recruiting coordinator Brandon Streeter.

“I think we just believe in going to get the right people, first, and we know that if we go get the right people, whether they're two, three, four, five stars, when they get here they're going to be developed and they're going to be successful,” Streeter told TigerNet in an exclusive interview. “There are too many examples of guys that have done that, and we've proven that. The reason I say that is if we just do the best job we can and go find those right guys, things will fall into place like they're supposed to and we'll fill those gaps as need be.”

Clemson had room for more players in the 2017 class, but the coaches focused on finding the right player versus finding a player.

“Just because we didn't fill every scholarship, we've got an opportunity for another guy on the team to get some scholarship money and we can add to that for the 2019 class as well and still be at 25,” Streeter said. “There's an exception to that rule. There are definitely some answers and some reasons why we do it and how we do it. We don't want to just reach out and get a guy at the last second because we want to make sure it's the right fit.”

For now, however, the coaches are focusing on the 25-scholarship number.

“It's 25. These numbers change so much throughout the year,” Streeter said. “You can't tell exactly what's going to happen until it does, but you've got to prepare yourself and have answers whenever things do happen. Right now, we're anticipating a full class of 25 and possibly more.

“From what I understand, if we were to give a scholarship to one of the walk-ons to fill some of those gaps in the spring, then it would be a third or fourth-year guy, then we could get that money back to utilize that money for full scholarships for the next year. That's just one example of a loophole or a way to add to that 25 if you need to.”

Current rules limit the number of scholarships to 25 in any given year, but there are loopholes. The limit is on 25 “initial counters,” which can be thought as players in their first year on an athletic scholarship. However, a team can bring in more than 25 enrollees in a given year, in a few circumstances. Most commonly, if an athlete graduates high school early and enrolls for the spring semester, and if the school stayed under a cap of 25 in the previous year (which Clemson did), it can assign enrollees to the previous class, up to the 25-man total cap.

If a player wants to delay his enrollment until the following spring, he can then be assigned to the following year’s class. But all players must be attributed to either a prior, current, or future class, and no class can exceed 25.

For Streeter and the Clemson staff, however, they won’t go wild. Why? Because a Clemson offer means something, more than other programs who offer every high school player they run across.

“I know every coach manages it a little different. Like Coach (Swinney) was saying about Coach (Tony) Elliott, he's really slow to offer guys and I'm very similar. I only offered Trevor (Lawrence) in that class,” Streeter said. “Then there are some guys who may have offered five or 1000000 guys at their position and manage it a little different. I couldn't even begin to tell you how many guys we offered but I can tell you it's a lot less than the majority of teams. That's part of our recruiting schpiel. When we talk to recruits, we can say, 'Look, we're doing it a little different than most people. We're going to be later to offer and when we offer, it means something.' Kids realize that and it helps that you're winning a lot of games.”