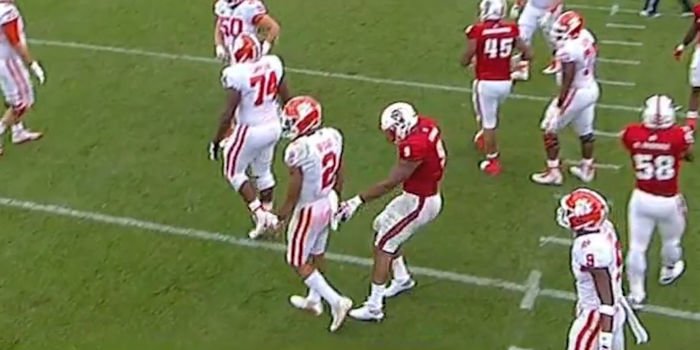 Towels were stolen all weekend in Raleigh

The Pigskin Prophet took last weekend off and went to his first college football game of the year. It was a mistake.

I called up a friend of mine who lives in the Triangle area of North Carolina and asked if he had any connections to NC State tickets. He replied that he did, so I made the trek to Apex and spent the night with him and his family.

I should have known something was off when I grabbed a towel out of the linen closet Friday night and put it in the shower area. When I got out of the shower, the towel was gone.

The next morning, the same thing happened.

We got to the tailgating area Saturday morning, and every paper towel I grabbed later disappeared. And had liquor thrown on me. And I was flipped off by a drunk NC State fan. She was only five years old. And she took my towel.

It was that kind of day in Raleigh.

Now on to some picks in what should be another wild weekend as we close in on the College Football Playoff.

I have to wonder if Urban Meyer filed a police report after the physical beatdown his team took in the cornfields last weekend. Seems like the Bucknuts don’t have any kind of identity other than getting blown out when they play good teams, something I will now call Bucknutting. Bucknutting happens whenever Ohio St. plays a team with a pulse and loses by more than four touchdowns. They get Sparty this week, and this one will be just like last season and go down to the wire. BUCKNUTS 27, SPARTY 26

Every towel in the greater Boston area is in jeopardy, and all of the hotels will put out towels only by request this weekend. Boston College has been playing better while the Puppies have lost two in a row. Last season, the Puppies let one loss turn into a losing streak, and we can see the same thing happening again. After the game, Puppy head coach Dave Doorout will scream that the Eagles had an Ipod on their sideline, pull out one of his hairs and cry into a stolen towel from the Ramada at Chestnut Hill. BC 23, TOWEL THIEVES 17

Here is what you need to know. Both teams are terrible. Both teams struggle on offense. Florida is 112th in total offense, while South Carolina is 115th in total offense. The difference between the two teams might be that South Carolina quarterback Jake Mazda is BOTH younger AND older than everybody else out on the field. Young old Jake just turned 36, but he’s only supposed to be in eighth grade. That is a lot of experience that the Gators have to overcome, especially in front of the Wolfpack, errr, I mean Gamecock fans in that distillery known as Carter-Fin…errr, I mean Williams-Brice Stadium. SOUTH CAROLINA, 6, FLORIDA 3

Don’t look now, but Pawwwl John-uns Floppers are in danger of missing out on a bowl game. This week the dirtiest team in college football hosts the Hokie Pokies, who danced their way to a loss in South Beach last week that damaged their ACC Coastal hopes. Now they need to win and hope they get into a good bowl game and not face South Carolina in Birmingham (I know, no tie-in for the ACC, but c’mon, Birmingham hahahaha). The dirty Jackets have to win two out of their last three (VT, Duke and Georgia) to make a bowl game, which means they really need to beat the Turkey Legs. Won’t happen. NOT DIRTY TECH 34, DIRTY TECH 27

Do you believe in upsets? Georgia has been stuck playing the awful teams from the SEC Least, but they travel down to The Plains to take on the Squirrels/Eagles/Tigers in a prime SEC matchup. Georgia has been winning games by running the football and playing defense while throwing it about three times a game. That won’t work this week against a stout Auburn defense that still thinks it has a shot at the College Football Playoff. Weird things happen in Jerdan-Rabbit Stadium, and Jake Fromm State Farm and his offense will struggle to score points. This is the upset of the week. AUBURN 20, GEORGIA 16

The Seminoles have gone off the reservation this season (was that inappropriate? I can’t tell anymore) and lost five games. They are bad on the offensive line, bad at quarterback, bad at receiver and tight end and bad defensively. Other than that, they’re pretty good. Clemson doesn’t believe in blowing people out, preferring to run the quarterback 47 times a game, even when the defense knows it is coming, so it’s hard to predict Clemson by a lot. Let’s see, Clemson gets a lead, runs it a lot, gives up two late touchdowns on defense and Clemson fans go into cardiac arrest. CLEMSON 28, FSU 20

It isn’t Catholics vs. Convicts, not with goody-goody Mark Richt at the helm of the Hurricanes. But this should be one of the better matchups of the weekend, and the 328 fans in attendance in Miami Gardens will be in for a treat, right up until the point it starts raining and the Miami players start parading that hideous gold chain they got from a pawn shop around the sideline. Word has it that Notre Dame sold out its allotment of tickets, but the Notre Dame fans sold them to Georgia fans. MIAMI 23, NOTRE DAME 20