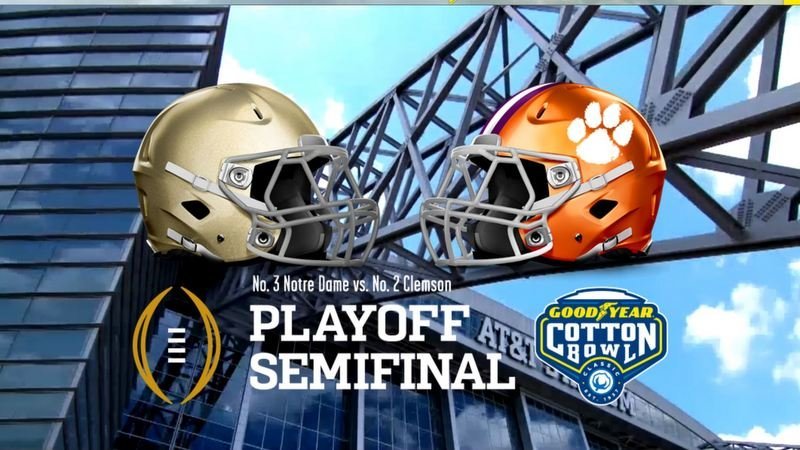 Clemson and Notre Dame face off in the Cotton Bowl

It doesn’t fall under the category of smack talk, and it’s not your typical bulletin board material. Every head coach should feel like his team has a chance to win, and Notre Dame head coach Brian Kelly knows his team can beat Clemson.

The No. 3 Fighting Irish take on No. 2 Clemson in the Cotton Bowl on Dec. 29th, but the betting lines out of Vegas have Clemson favored anywhere from 10 points to 13 ½ points. The teams don’t have a long history of playing against each other and last played in 2015, a 24-22 Clemson victory that wasn’t decided until Irish quarterback Deshone Kizer was stopped on a two-point conversion attempt with just a few seconds left on the clock.

Kelly was asked if the Irish can use the film from the 2015 game to prepare for the Cotton Bowl, and while he answered the question, he also threw in the fact that his team believes they can beat the favored Tigers.

“I mean, we looked at the film, but the only -- there was one thing that is similar that they have both coordinators back, but there are not many players that are on that team from either team that are still there,” Kelly said. “You know, our players know that they can play and beat Clemson, and I think that you're taking most of your analysis and breakdown from this season in terms of what they do and what we do.”

Kelly said the Tigers will present a challenge to the Irish on both sides of the ball.

“Starting on offense, you know, I think the running back, (Travis) Etienne, I think he's as good a running back as we've seen since Georgia of last year, that kind of talent,” Kelly said. “The quarterback is really good. He's got great arm talent. He's tall and can see the field. I think the receiving corps is on par with a USC receiving corps. That's a pretty dynamic offensive set.

“Defensively, I think you obviously start with the defensive front. You probably have three guys there that could be top 50, top 60 players in all of college football. So that's a pretty good group. I mean, comparing them to maybe North Carolina State last year in some fashion, LSU, that kind of capability on the defensive line. It's a really, really formidable group. Just a really talented football team, but more than anything else, it's a team that's been there four times. They know how to win. They've been there before. They play with a lot of confidence.”

Kelly said he is taking the Irish into the Dallas area early to get the team prepared for the big moment of the College Football Playoff.

“It's the lead-up. It's not necessarily just that moment. It's just all that goes with it in preparing them so when they do see it, they understand what to be ready for more than anything else,” Kelly said. “So it's just getting them prepared for that moment, making sure they're aware of it, and you know, it's great, we're going to practice four times inside AT&T. I think getting -- look, that Jumbotron is 60 yards long. Just getting used to kind of the environment there is really helpful.

“But being aware of it, getting them in tune with what it's going to be like and talking it out is most important.”