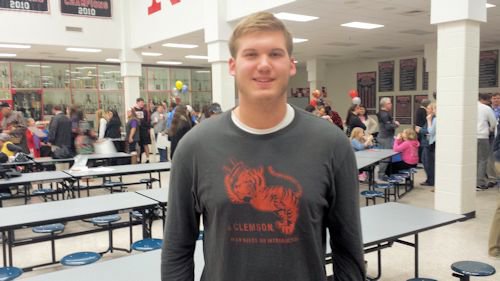 Hyatt with his “A Clemson man needs no introduction” shirt.

The nation’s number one offensive tackle for 2015, Mitch Hyatt

View Full Profile out of Suwanee (GA) North Gwinnett, patiently stood in the wings waiting to officially announce his commitment to Clemson, but he didn’t need an introduction – the applause as he walked to the stage and the shirt he was wearing said it all.

“A Clemson man needs no introduction.”

After hearing stories of playing in Death Valley from his uncle and former defensive lineman Dan Benish, Hyatt said that he had always dreamed of playing football at Clemson University, and Wednesday night he took another step toward making that dream a reality

“I would have to say yes [it has always been a dream]”, Hyatt told the assembled media. “I’ve always had the idea in my head that I’ve wanted to go to Clemson and I’m excited for it to come true. He (Benish) says that running down the hill is unspeakable. It’s one of those things that you actually have to go there and be a part of it to understand what it’s like.”

Hyatt watched as all of the North Gwinnett seniors participated in their Signing Day ceremony, and still knowing that his day was a little over year away, he knew that it was time to announce his decision so that he can turn his focus to the 2014 football season.

“I just want to get this out of the way and push it to the side so that I can focus on making myself better and making my team better, also,” Hyatt said. “It’s definitely a good feeling because I know I don’t have anything to worry about any more.”

Clemson hosted a handful of juniors last Saturday, including Hyatt and the five-star prospect said that was the day he knew he was destined to be a Clemson Tiger.

“I went to Clemson’s Junior Day this past Saturday and I didn’t know too much about the academics and I figured out that Clemson fit all of my academic needs,” he said. “Clemson is the exact fit for me.”

Hyatt chose Clemson over Georgia and Ohio State and said that he liked things about the other schools, but Clemson was the entire package.

“Ohio St and Georgia were my other favorites,” he said. “I’ve been to a few Georgia games and I liked a few things about them. Ohio St. Coach Urban Meyer is a great coach and it seemed like a good place to be.”

Hyatt plans to enroll in January of 2015, and he said he will be ready to make his mark on the Clemson offensive line.

“I wouldn’t say that I want to change the whole perception of the offensive line, but I want to go in and make my mark,” he said.

Hyatt is the sixth commitment for the class of 2015 for the Tigers.