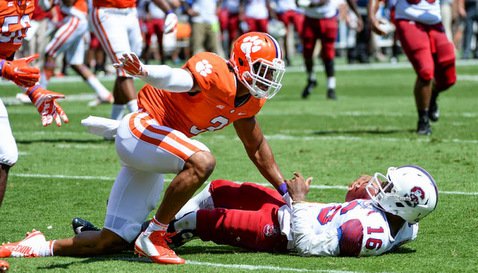 Beasley weighed in at 246 pounds Friday

Vic Beasley
RS Sr. Defensive End
#3 6-2, 236
Adairsville, GA
View Full Profile made quite the statement Friday at the NFL Scouting Combine, and he didn’t even have to take to the field to do it.

The former Clemson sack master showed up in Indianapolis for the combine Friday morning and weighed in at 6-3 and 246 pounds, which is 11 pounds more than he was listed for going into the Russell Athletic Bowl.

Now that the weigh-in is out of the way, Beasley can turn his attention to how he performs in drills on Sunday (starting at 9 a.m. live on NFL Network). Beasley, who made his reputation as a speed pass rusher, will show off that speed in the 40-yard dash.

Following Friday’s weigh-in, Beasley said the Miami Dolphins were showing the most interest.

Beasley told the gathered media that he models his game after Von Miller of the Denver Broncos and the Seattle Seahawks' Bruce Irvin, outside linebackers known for rushing the quarterback.

He then said that he doesn’t care who drafts him or when he gets drafted as long as his name is called.

“I just hope to get drafted. Wherever I get drafted then that’s where I go,” he said. “I am just going to try and use my ability to get drafted as high as I can. Outside linebacker, d-end, really I can play either one. Whatever team I get picked by and whatever position they want me to play I am willing to move wherever they want me to move. The game is changing and the NFL is a passing league and you are going to need guys who can rush the passer and that’s what this draft is predominantly based on.

RT @DoughertyDrew: "I just like to use my speed, my rip."- @ClemsonTigers pass rusher Vic Beasley on his strengths. pic.twitter.com/sqWYGqwu1T

Vic Beasley weighs in at 246 lbs. Was able to bulk up. Huge for draft stock as major questions on his weight. Fits in 3-4 D much better now

Clemson DE Vic Beasley, who met with the Cowboys last night, had 25 sacks, 44.5 tackles-for-loss and 21 QB pressures over last 2 seasons

Clemson DE Vic Beasley with high praise for @sammywatkins. "On the field he's the best athlete I’ve ever seen." pic.twitter.com/qXYfAVdQcq