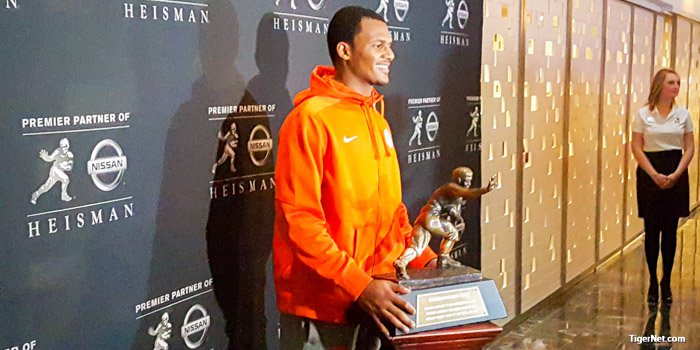 Watson poses with the trophy before last year's ceremony

NEW YORK, NY – There was a buzz inside Manhattan’s Marriott Marquis Friday afternoon, with former Heisman Trophy winners arriving for today’s Heisman Trophy presentation. The winners mixed with incredulous fans – many who were simply in town to shop – and had the luck to see one of their favorite players up close and in the flesh.

On the eighth floor of the hotel, four of the five finalists for this year’s award met with the media as gawking fans wandered by, many of them more flabbergasted at the sight of college football’s most prestigious award sitting out in the open than they were by the collection of football talent and gathered media.

Conspicuously absent? Clemson quarterback Deshaun Watson, who was honored in Baltimore Friday night to receive the Johnny Unitas Golden Arm Award. The award is given annually to the top college quarterback who is on set to graduate with his class. Watson is on pace to earn his undergraduate degree on Dec. 15.

Watson and members of the Clemson sports information department will make the short hop from Baltimore to New York Saturday so Watson can be a part of Saturday’s festivities. Watson’s absence, however, doesn’t mean he wasn’t the talk of the room.

It actually turned out to be an interesting afternoon despite Watson’s absence. One national media member wanted to know if Watson takes his cue from head coach Dabo Swinney and uses any negative talk as fuel for his competitive fire. I replied that I didn’t think it was as much that as Watson simply hates to lose. However, I would imagine if he loses the Heisman (and all signs still point to Louisville’s Lamar Jackson claiming the crown) he will spend the next one or two games showing the voters they got it wrong.

As one media person put it – a Watson loss in the Heisman is bad news for Ohio St.

Members of the Michigan media are on hand to cover all-everything defender Jabrill Peppers, who told the crowd Friday that he didn’t deserve to win the Heisman, that there were players more worthy that deserve the award.

Peppers said earlier this week that he would give the award to Watson over Jackson. Peppers told The Dan Patrick Show on Thursday, in part because Watson led the Tigers to a win over Jackson's Cardinals in October.

"Since (Watson) won that game (against Louisville), I would probably give him my vote," Peppers said. "Whenever you have two Heisman finalists facing one another -- it was a very, very good game -- but at the end of the day, Deshaun Watson still came away with the victory. That's who I'd definitely give my vote to, even though you can't knock what Lamar Jackson has done."

Would that head-to-head matchup sway voters? Clemson topped Louisville, 42-36, in October, with Watson passing for 306 yards and five touchdowns, with 91 rushing yards. Watson also threw three interceptions. In what was Louisville's first loss of the season, Jackson threw for 295 yards and ran for 162.

That win sparked a strong finish to the season for Watson, who connected on 74.2 percent of his 186 passes for 1,586 yards, accounted for 20 touchdowns and averaged 356.8 total yards of offense over the last five games.

Still, the consensus among the media members Friday was that Jackson built too big of a lead early in the season.

*Speaking of the Michigan media: One scribe asked what it was like to cover Swinney, and I replied that it was never boring. He replied that covering Michigan head coach Jim Harbaugh has its moments, but for the most part, it’s “mind-numbing.” We went on to discuss the difference in the press conferences between the two coaches – at Clemson, the media has an over-under on the number of minutes Swinney will use in his opening statement, and the Michigan writer said they count Harbaugh’s in the seconds.

*We ran into former Heisman winner’ Tim Tebow and Charlie Ward in the hotel, and it’s obvious both are big fans of Watson. Ward said he would grant an interview with TigerNet at some point today to give his thoughts on Watson and maybe even the Clemson/Florida St. series.

*I’ll close with this. Due to the high prices of hotels in Manhattan this weekend, Nikki and I were forced to stay out near LaGuardia Airport in Queens. Rather than ride the subway back to our dropping off point and walk through Jackson Heights in the dark, we opted for an Uber ride. Our driver hailed from South Korea, but he let us know right off the bat that his favorite sport is football and that he’s a huge New York Giants fan.

He wanted to hear about Watson and the Heisman events, and told me I was “lucky to get paid to watch football.” Of course, I can’t disagree with that.

We told him about Dexter Lawrence and some of the big old youngins’ on the football team, and he couldn’t get enough information about college football. We showed him pictures of Death Valley and he mentioned that he once spent a few weeks in Georgia and couldn’t get over the car flags that Bulldog fans flew.

Then came the best part of the conversation, one that caused Nikki to laugh out loud.

“Who is Clemson’s biggest rival in college football,” he asked. Nikki replied that it was the South Carolina Gamecocks, and he slowed the car, turned all the way around in the seat, and said, “Who?”