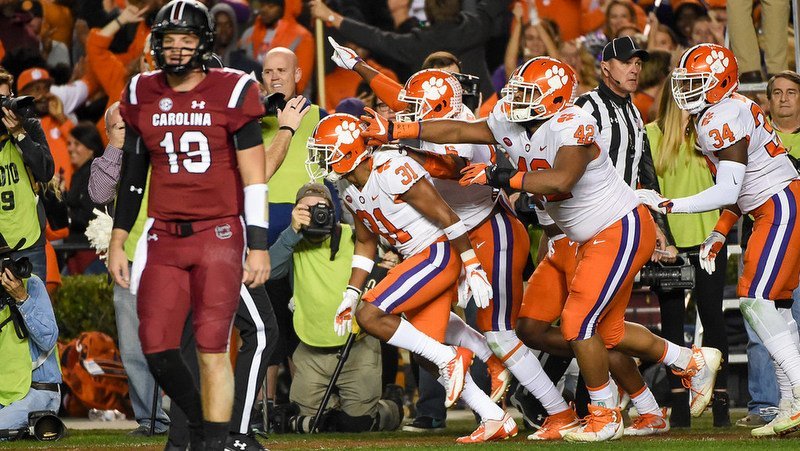 It’s rivalry week in the state of South Carolina and it’s time to get excited.

No. 3 Clemson has breezed through its schedule over the last several weeks and has one regular-season game remaining – at South Carolina this weekend. Kickoff is set for noon Saturday on ESPN. For those of us here at TigerNet, this is the best time of the year (especially recently.)

The rivalry game is followed by the ACC Championship, the College Football Playoff selection show on Sunday and an almost endless stream of press conferences and conference calls leading up to the Home Depot College Football Awards Show in Atlanta the second week of December.

After that, it’s bowl prep and hopefully a trip to a College Football Playoff game. It’s hectic, and there isn’t a lot of time to ruminate on Christmases past, present, or future, but we love every second of it.

Back to rivalry week.

As I’ve stated, the first Clemson football game that I “covered” as a credentialed member of the media was way back in 1987 when the Tigers hosted Georgia. I was fresh out of high school and working at The Greenville News in the sports department, and longtime columnist Dan Foster found me filing pictures that morning, handed me a press pass and said, “let’s go.” It was memorable in so many ways.

Fast forward to 1993. I was working with the Greenville Piedmont (the afternoon paper in Greenville at the time) and was asked to write a sidebar for the rivalry game in Columbia. The other writer offered to drive and we climbed into his old beater for the trip to Columbia. Just a little past Laurens one of his tires went flat, and we pulled over to the side of the road.

He quickly admitted that growing up in suburban Wisconsin, he had never changed a tire or even knew how to work a jack. I spent 45 minutes we didn’t have endeavoring to teach him to change a flat (thank goodness he had a full-sized spare) and we got back on the road.

We hit Huger Street in backed up traffic, and it wasn’t long before we smelled radiator fluid. Sure enough, that old beater was running hot and we pulled into a service station and popped the hood. The mechanic on duty told us the car needed a new heater hose and thermostat, and it would take a few hours. We left the car in his care.

Keep in mind, this was pre-cellphone and pre-Uber. We used a payphone in the service station to call a cab to take us to the stadium. I am not sure what I was expecting, but what arrived was not it. A beat-up old Yellow Chevy cab showed up, and the driver looked like a person who came in last in a Hulk Hogan lookalike contest.

He was – to use a word – spastic. And he had a huge, garnet-colored styrofoam rooster tail on the trunk of his cab (some of you from Columbia might remember the guy). When we informed him that we were with the media and needed to get to the game in a hurry, he told us to hang on. The next 15 minutes were spent going the wrong way up side streets, taking a trip through someone’s yard (we hopped the curb to avoid a jam) and broke every traffic law there is to break.

When we finally arrived at the stadium, he turned around to look at us with his one good eye and said, “Are you sure you aren’t Clemson fans? Cause if you are, I’m gonna have to charge you triple. Either that or murder and keep you in the trunk for a few days.”

He was kidding. I think.

We made it to the press box in time to grab a quick bite and head to the sidelines. I walked around in awe until it was time to head back up. I remember Clemson won 16-13. I remember a coach gave us a ride back to the service station and our old Chevette. But what stood out was the atmosphere – the fans, the electricity, and the intensity. I was hooked.

I’ve covered a lot of Clemson-South Carolina games since then, and there are more than a few that stand out. 63-17 comes to mind first. The Catch II. The Brawl. Five in a row by both teams.

One game that really stands out was in 2013. South Carolina won that game 31-17, but it was a game Clemson could have won (and should have, if not for silly mistakes). I remember defensive tackles coach Dan Brooks sitting on a chair outside the Clemson locker room, shaking his head. He said, “That was one we should have won.”

It was at that point that I realized the rivalry was about to turn. I had a feeling that loss would be the starting point in Clemson breaking the streak.