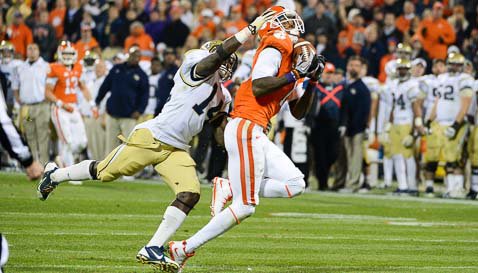 CLEMSON – Georgia Tech has long been a thorn in Clemson’s side, but that just wasn’t the case Thursday night.

No. 8 Clemson defeated Georgia Tech 55-31 in a game that was never really in any doubt.

It was over when: Late in the third quarter, the air was sucked out of Death Valley as quarterback Tajh Boyd fell to the ground holding his left shoulder, but backup Cole Stoudt seamlessly transitioned into the game. Stoudt completed a six-yard pass to Sammy Watkins and rushed for seven yards, setting up his 13-yard scamper into the endzone giving Clemson, a 48-24 lead over Georgia Tech.

Game ball goes to: Tajh Boyd played one of the best games of his career Thursday night, but the game ball has to go to Martavis Bryant who finally showed everyone why the coaches have been bragging on him since fall camp. Bryant finished the game with five receptions for 176 yards and one touchdown.

Stat of the game: Clemson’s defense tallied 10 tackles for loss, with only one of those going for a sack, while holding Georgia Tech to 248 yards rushing.

What it means for Clemson: Clemson’s quest for an at-large BCS Bowl berth remains intact as the Tigers march ahead during the month of November. Clemson will finish the ACC portion of its schedule 7-1 and look to finish out the month of November and the non-conference schedule against The Citadel and rival South Carolina with bang. A win next week, most likely sets up a top-10 matchup with the Gamecocks in Columbia.