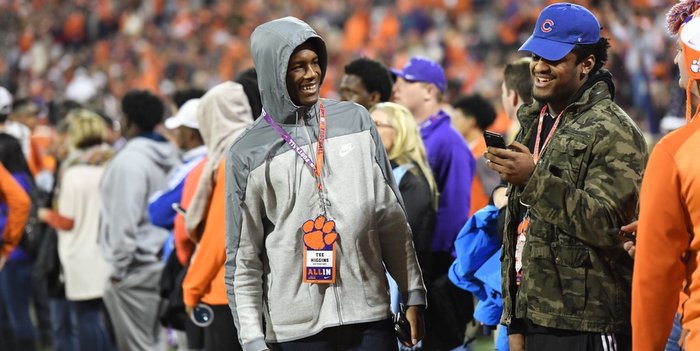 The Clemson Tigers' resounding thrashing of in-state nemesis South Carolina on Saturday night reverberated throughout the Palmetto State, the college football landscape, and into the homes of the Tigers' 2017 freshman class.

(If you're just now tuning in, the Tigers defeated the Gamecocks 56-7 in Death Valley – the largest margin of victory in the series since 1900.)

TigerNet reached out to some of those commits via text message Monday evening, and many replied to give their thoughts on this historic game in the rivalry, its implications, and the state of the Clemson program heading into the postseason and beyond.

“It was a great atmosphere, and the little brother was put in his place once again,” said Matt Bockhorst, a four-star, 300-pound offensive guard out of Cincinnati, referencing a pregame taunt from one of the Gamecocks that backfired in grand fashion. “Nobody does it like Clemson.”

“It was wonderful seeing us whoop them lol,” texted Amari Rodgers, a stellar wide receiver out of Knoxville, Tenn. “Always great winning a rivalry game like that, and I can't wait to be a part of it.”

Jordan Williams, a four-star defensive end out of Virginia Beach, Va., was somewhat taken aback by the game's one-sidedness.

“I expected a better effort out of South Carolina, but Clemson executed on offense and defense,” Williams said.

“It was a great game to see hahah,” texted Tee Higgins, another standout wide receiver from the Volunteer State (Oak Ridge). “They went out there with an edge and put it on them!”

“I thought it was a great win,” said Blake Vinson, an offensive tackle commit from Citra, Fla. “I'm really excited for all the coaches and players! Go Tigers!”

“It was a great game all the way throughout,” said Chase Brice, an incoming quarterback prospect from Loganville, Ga. “Both sides of the ball played lights out. You weren't stopping the offense and nobody was gonna get much in the defense. They looked ready to go for the ACC Championship.”

Baylon Spector, a Clemson legacy recruit and outside linebacker/safety out of Calhoun, Ga., pretty much agreed with Brice's assessment.

“Thought it was a good win and made a statement,” Spector texted. “Need to keep the momentum going to Orlando.”

“The better team won at the end of the game, and Clemson was on top once again,” said AJ Terrell, a four-star cornerback out of Atlanta.

Noah DeHond, a four-star, 6-foot-7, 325-pound tackle from Paramus, N.J., believes the lopsided nature of the 2016 Palmetto Bowl will leave a mark on both programs for years to come.

“It was night and day between the two programs,” DeHond said. “The outcome of that game will be a trend that continues for a long time.”

No. 4 Clemson's charmed and inspired run to the College Football Playoff continues Saturday night, as the Tigers take on No. 19 Coastal Division champion Virginia Tech for the ACC title in Orlando, Fla.

That's the game i was expecting from Clemson #StateChamps

We not playing around with these fools ??

Really enjoyed my Clemson visit can't wait to get back !!!!???? pic.twitter.com/BGB56e3eMN

A night game in Death Valley is so sweet ??