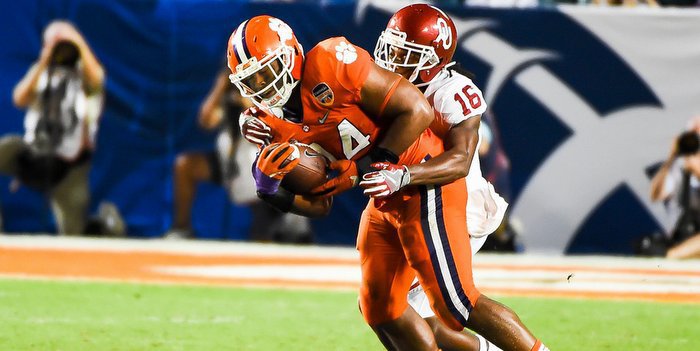 Goodson will have a chance with the New York Giants

B.J. Goodson will join an organization that is known for great linebackers – Lawrence Taylor and Carl Banks – and he’s leaving a small town that produced Levon Kirkland, Michael Hamlin and Marshall McFadden.

However, when he puts on the New York Giants helmet he wants to make a name for himself and not be just another linebacker or just another NFL player from Lamar, South Carolina.

“I definitely want to make my own name, but as far as following those guys they are great off the field,” Goodson said. “They are even greater people. I will definitely follow those guys as far as that is concerned, but I want to create my own name and put my stamp on the game.”

The New York Giants drafted Goodson in the fifth round of the NFL Draft Saturday afternoon – 109th overall – and he told TigerNet shortly after receiving the news that he felt like his time was today.

“I definitely figured that it would be,” Goodson told TigerNet Saturday afternoon. “I just needed a couple of things to happen and it worked out in my favor. They called right before, about two picks before. I knew what time it was and I was just excited. To be able to go to an organization like that means a whole lot.”

Goodson played behind current NFL linebacker Stephone Anthony, but when his time finally came he made sure to make the most of it and give himself a chance to play at the next level.

Goodson will have a chance with the New York Giants "

Goodson had 108 tackles, 14.5 for loss with Clemson last season. He had 5.5 sacks, a forced fumble, five passes defended and two interceptions. Goodson's run-stop percentage of 11.9 last season was seventh in the nation among linebackers, according to Pro Football Focus. Also per PFF, Goodson was sixth in the nation among linebackers in both tackling efficiency and pass-rush productivity.

Those stats and his leadership are what gave Goodson the chance to have a professional football career and he said he is still trying to process all of his emotions after receiving the call of a lifetime.

He will travel to New York to begin the next step in his journey next week, but for now, he’s celebrating with his friends and family.

“I've got everybody over and I'm about to throw some food on. I'm just going to enjoy this moment,” he said.