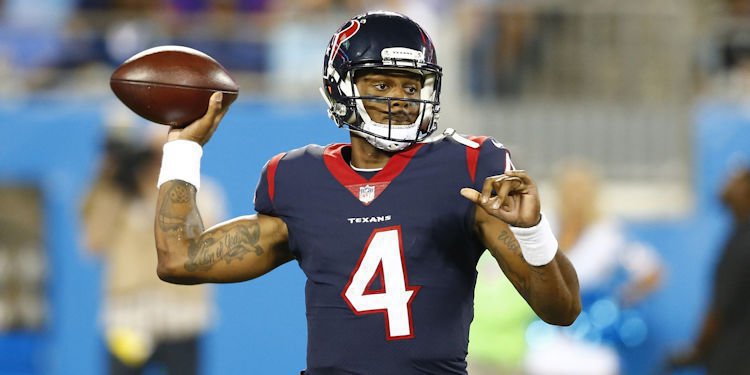 CHARLOTTE, NC – Orange was a popular color at Bank of America Stadium Wednesday night. Ben Boulware’s popular No. 10 Clemson jersey was represented, as were the numbers of former Tigers Carlos Watkins, D.J. Reader and Nuk Hopkins. But Deshaun Watson’s iconic No. 4 was everywhere.

The Houston Texans traveled to Charlotte to take on the Panthers in what would otherwise be a meaningless preseason game, but with the game taking place just two hours from Clemson’s campus, thousands of Tiger fans showed up to cheer on their heroes.

Watson made his first appearance early in the second quarter – with just over 14 minutes to play in the first half – and entered to a huge ovation from the Clemson faithful. His first completion went for six yards, and he attempted 14 first half passes and led a scoring drive late.

Watson led a third quarter scoring that should have looked familiar to Clemson fans, driving the Texans 75 yards on 15 plays in a drive that took almost eight minutes off the game clock. Watson went 6-8 passing for 52 yards before capping the drive with a 15-yard TD rush, the first of his career.

Watson finished the night 15-for-25 for 179 yards through the air and he added another 24 yards and a touchdown on three carries. He was sacked three times for 15 yards and told TigerNet after the game that he was glad to finally get back out on the field.

“Today was good to get back out there and experience my first NFL game. It was fun,” Watson said. “My main focus is making sure I am doing the right things as a quarterback and leading the team. Operate the game plan and do whatever the coaches ask me to do.”

Watson didn’t turn the ball over, a key for any NFL quarterback.

“That's one of my goals, to take care of the football. Especially at this level,” he said. "They prepared me to go out there and be confident in my work and be able to operate in the system and just to go out there and try to do my best and that's what I did.

"He is a smart and instinctive player. First game out there I thought he did some big things," O'Brien said. "It is a big jump from college to the NFL. I thought he handled it pretty well. There are probably a couple of things we could have done differently. He could've played a little bit better on certain plays, but overall I thought he handled himself pretty well for the first time out."

Watson’s touchdown came in the same end zone of Bank of American Stadium that he scored a go-ahead touchdown for Clemson against North Carolina in the ACC Championship Game here two years ago, and he smiled and said it gave him a sense of déjà vu.

“It's always good, regardless if it's a practice or a game or whatever it is. To get in the end zone is hard to do. It's a good feeling,” Watson said of his first touchdown. “Actually, when I came out for pregame warmups I told a couple of guys that the last time I was in this stadium I won the ACC Championship. It was a good feeling to come back here and do the same thing.

“I was just extending the play. That is the coaches have been telling me - if there is nothing there then do what I do. Don't change and try to force anything. There wasn't anything there, and I saw the hole and tried to get into the end zone and I did.”

Watson said it made him happy to see all of the orange in the stadium, and that he was thankful the game was close enough for his family and the Clemson fans to attend.

“It was awesome. To be able to have that support from the fan base, especially when I come back into the area,” he said. “I just want to thank all my fans and the people that support me. It was good. God works in mysterious ways. My first NFL game is close enough for my family to come see. Everybody came by and showed up.”

Often his own harshest critic, Watson said there plenty of things he can work on.

“A lot of things. I can't say anything right now because I haven't watched the film,” he said. “We will get back to West Virginia (the site of the Texans’ training camp) tomorrow and watch the film and correct my mistakes. I will do what I need to do.”

After the game, Watson shared a hug with Panthers linebacker and former teammate Ben Boulware.

“It was weird. Especially after the game when I saw him,” Watson said of seeing Boulware in a different uniform. “We are used to being on the same sideline. Being on the opposite sideline was weird.”