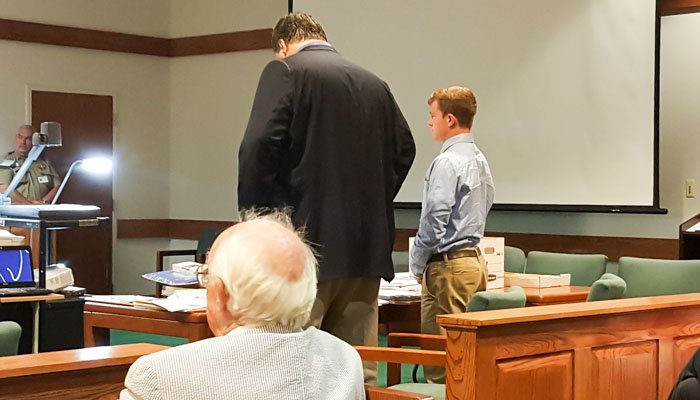 Rogers tells the judge he has elected to not testify.

PICKENS – The defense rested its case following a contentious afternoon during the trial of the man accused of vandalizing Clemson University's Howard's Rock.

The prosecution rested its case shortly after the jury returned from lunch, and defense attorney Frank Eppes called two witnesses to the stand during the afternoon session before resting his case a little after 3:30 p.m.

Micah Rogers, 20, of Pisgah Forest (NC) has been charged with grand larceny and malicious injury to property valued at more than $10,000 for vandalizing Clemson’s Howard’s Rock. If convicted, Rogers faces up to ten years in prison on each charge. The vandalism took place on June 2, 2013 when Rogers allegedly broke the casing of the pedestal that houses Howard’s Rock and chipped off a large piece of the rock.

The trial began Monday with Solicitor Walt Wilkins and Assistant Solicitor Baker Cleveland serving as the state’s prosecutors. Leila Dunbar – an expert witness who as appraised memorabilia for the NFL Hall of Fame, Baseball Hall of Fame and New York Yankees Museum testified that if Howard’s Rock was broken into 1,344 pieces, each piece would sell for $100 each, totally $134,000.

Winn’s testimony stated that Rogers, Winn and A.J. Gainey arrived outside the stadium on the night of the vandalism, and Winn said while he stood in front of the gate that stands in front of Howard’s Rock Rogers scrambled over the fence. Winn testified that not long after he heard the sound of glass breaking and hammering coming from inside the stadium. He then testified that he and Gainey went across the street to the Scroll of Honor and were later joined by Rogers. As the trio walked back to Rogers’ truck, Winn testified that Rogers stood in the middle of the road and danced and said, “I’ve got what I want. I got a piece of the rock.”

Prosecutors also had SLED agent Michael Sloan and Rhodes testify that Rogers was visibly nervous when he met with investigators at the Pickens County Courthouse and asked for a trash can to be handy in case he needed to throw up. Defense attorney Frank Eppes called his first witness of the afternoon – Austin Owens – to show that Rogers has a history of stomach issues.

Owens said he has been a friend of Rogers’ for over six years, and he remembers Rogers getting sick prior to football games and on other occasions when Rogers would be nervous. Eppes then called Connie Rogers – Rogers’ mother – to the stand.

It was then that things got a little contentious as Eppes endeavored to introduce photos into evidence that the state didn’t want the jury to see. The judge dismissed the jury and the two sides and the judge hashed out the differences over the next 20 minutes, the end result being that the photo Eppes wanted to introduce could be shown.

Connie Rogers testified that following the accusations against her son, she bought and downloaded an internet program that allowed her to download pictures from Micah’s phone and found one of him in front of Clemson's Scroll of Honor, which is across from Memorial Stadium, the night of the vandalism. The time on the photo was 11:35 p.m, and the state alleges the vandalism took place sometime around 11:30 p.m. She also testified that Micah has had a weak stomach his entire life and even brought Prilosec into the courtroom as evidence. The defense rested its case at that point, and the judge said that due to the late hour in the day the jury would hear the closing arguments and begin deliberations on Thursday.