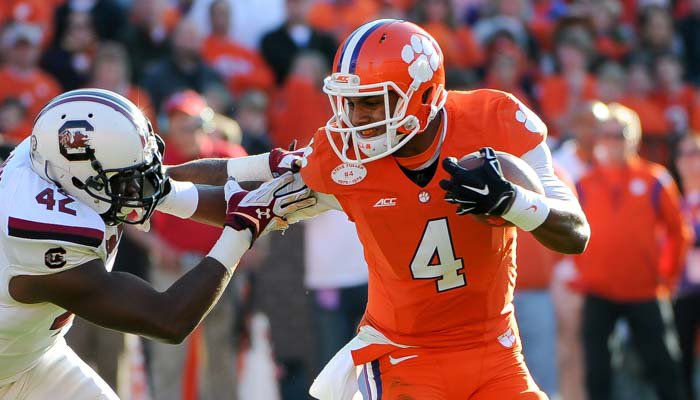 Artavis Scott scored a couple of touchdowns against the Gamecocks

TigerNet took a little break from a Decade of Dabo to concentrate on The Opening Finals but now is a good time to post the final five games. 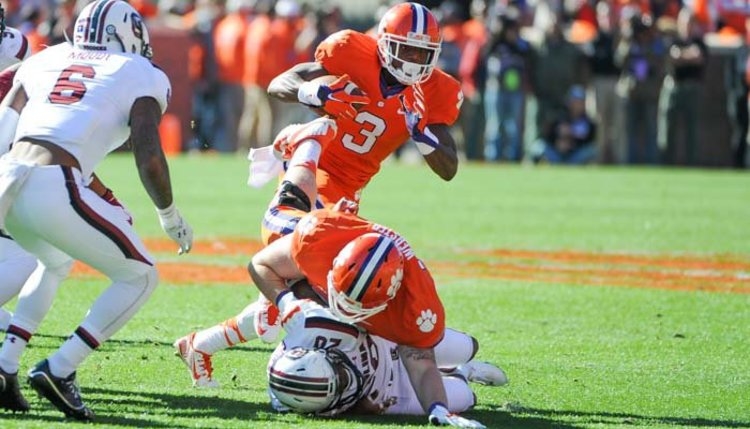 Artavis Scott scored a couple of touchdowns against the Gamecocks "

South Carolina’s five-game winning streak in the series happened at about the time social media took off – people were joining Facebook and Twitter in record numbers, and the Gamecocks were able to claim superiority in the rivalry.

Five-bombs on Clemson players and coaches – especially head coach Dabo Swinney – were prevalent as a fan base that had never had much to cheer about could finally claim some bragging rights. They went at it in full force.

The Tigers were starting to rise to national prominence, but were having trouble with Florida St. and South Carolina and until the Tigers could knock off one or both, the big bowl games at the end of the season weren’t quite as special to many fans.

The Tigers hadn't beaten the Gamecocks since 2008, an unprecedented run of failure that overshadowed their 32-8 record the past three seasons. This time, Clemson showed off a perked up offense bolstered by the return of freshman starter Deshaun Watson at quarterback.

The Tigers beat Oklahoma in the Russell Athletic Bowl a month later and the current of success had its beginning.

During the game, few people watching knew just how impressive it was that Watson was leading Clemson to a rivalry-turning, double-digit victory over the Gamecocks.

Sporting a highly-visible brace on a knee injured weeks before, Watson showed issues with mobility at times and came out briefly but toughed it out to total 269 passing yards - including two flips in the backfield to Artavis Scott for lengthy scores - and rushed for two goal-line touchdowns as well.

Postgame, Swinney would then casually mention minutes into the press conference that Watson, in fact, played the game on a torn ACL, building the legend of the Gainesville, Georgia native who would go on to lead Clemson to back-to-back national title games.

Honorable mentions for player of the game would go to Wayne Gallman, who rushed for 191 yards on 27 carries - and Scott, whose two long scores from the behind the line of scrimmage-on made up 123 of his 185 yards on seven catches. On the defensive side, Vic Beasley got in on three tackles for loss and a key forced fumble to help give Clemson its first lead in the second quarter.

Stat of the game – sort of

The game was the first of Watson’s 3-0 record against the Gamecocks. One of his high school coaches – Lyn Marsh – is a Clemson fan and Watson promised Marsh he wouldn’t lose to South Carolina.

“Forget the records; this is just one of those games you want to win,” Watson said. “You want to have the bragging rights for 365 days and be able to prove that you were the better team. That was one of the goals I set coming to this university.

“All games are pretty big, but this game has that little extra juice to it just because it's the in-state rivalry and the state championship. There is so much tension between the two teams and the two universities.”