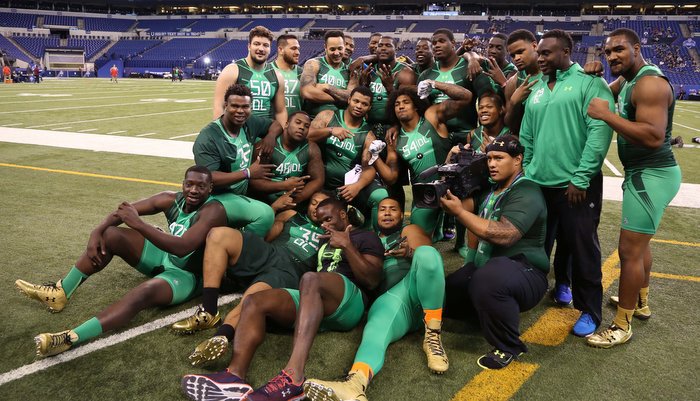 The NFL Scouting Combine is wrapping up in Indianapolis’ Lucas Oil Stadium and there is no doubt that some of the biggest winners were Clemson Tigers.

Clemson’s defense in 2014 was top-ranked for a reason – it had a lot of good players that will go on to play in the NFL and the combine was a chance for many of the lesser-known players to show off their talents.

The star, however, was Vic Beasley

Beasley ran a 4.53 40-yard dash, which was the fastest time among all the front-seven defenders who ran on Sunday. The competition was stiff -- five others ran sub-4.6 times -- but after showing well in various other drills, Beasley was the talk of the combine on Sunday.

NFL.com said Beasley was the “Biggest Workout Winner” of the combine.

“Clemson's Vic Beasley not only blazed the best 40-yard dash time of the day at 4.53, but he also finished second among defensive linemen in three other events: the vertical jump (41 inches), the broad jump (10-10) and the 20-yard shuttle run (4.15 seconds). His three-cone drill time of 6.91 was tops among the defensive linemen and the only sub-7.0 time recorded at the position. Throw in his 35 reps of 225 pounds on the bench press (tied for third best of all combine participants), and Beasley secured some big money in Indianapolis. It was borderline unfair for Beasley to be grouped with defensive linemen rather than linebackers, as he would have been the top standout in either group.”

Chase Goodbread, College Football 24/7 writer, had this to say about Beasley:

“Vic Beasley, edge rusher, Clemson: It's time to acknowledge that Beasley is one of the top pass-rushing prospects in the 2015 class. At the NFL Scouting Combine, he has silenced critics questioning his size, strength and power, capping off a fine week with a sensational on-field performance Sunday. The 6-foot-3, 246-pound edge rusher pumped out 35 reps on the bench press and posted impressive marks in every athletic drill. From his sizzling 4.53-second time in the 40-yard dash to his terrific measurements in the jumps (41-inch vertical, 130-inch broad) to his remarkable shuttle times (6.91 three-cone drill, 4.15 20-yard shuttle), Beasley showed scouts that he is one of the premier athletes available in this draft. Most importantly, he's packed on nearly 15 pounds since the end of the season without losing any speed or quickness; and he displayed more power than most evaluators expected prior to this event. Given Beasley's impressive athletic feats and his solid résumé as a pass rusher, his stock is shooting up after this week in Indy.”

“Anthony is one of the best ILB prospects in the draft no one is paying attention to.”

The analyst added that he was happy to see Anthony "tear it up" at Sunday's combine workouts.

“He was kind of a rotational guy for Clemson - only four starts in his career but his career was 47 games. They would bring him in. He ran a 4.84 at 250 pounds so he's a quick interior disrupter,” Eisen said.

Grady Jarrett
Sr. Defensive Tackle
#50 6-1, 290
Conyers, GA
View Full Profile , also a first-team All-ACC defensive tackle this year, had 30 reps of 225-pounds in the bench press, seventh best among all defensive linemen. His 7.37 time in the three-cone run was 13th best and his 112-inch broad jump was 15th best.