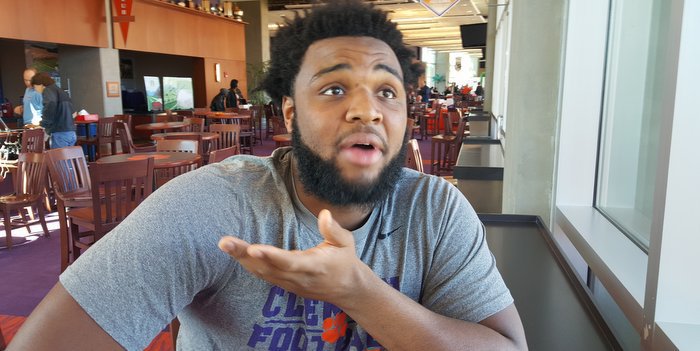 Christian Wilkins has done everything for the Tigers this season

CLEMSON – It was another busy day in the WestZone, and one of things we learned is that defensive end Christian Wilkins is more than just a defensive end who also plays on special teams.

He's a practical joker, and he's the kind of guy who destroys even the best-laid plans on special teams.

Defensive coordinator Brent Venables met with us for about 15 minutes Tuesday, and he told us a story about Wilkins that bears repeating, and it starts with assistant coach Dan Brooks designing a fake field goal.

“So, Coach Brooks has this fake field goal that he's been working on,” Venables said. “Somebody else in college football did it, and it worked, and coaches are the biggest copycat guys. And this one worked. So he's talked about it in the meeting, and he has it all drawn up, and they have the scouts coached up, and they come out there for play one. Now, Christian is ready for it. It's an hour and 45 minutes later, and our guys are meat heads, and they forget in ten minutes let alone and hour and 45 minutes, and so the first play of practice we line up in this fake field goal. And Christian jumps this quick little pass out there, and he house calls it (takes it into the end zone). Oh my gosh, it made Coach Brooks so mad. Cause that wasn't the end of the play -it was supposed to be a double-pass. And Christian is high-stepping down the sideline. And you can't get mad at him. Just move on to the next play, because you can't get mad at him. I have a long list of guys that if they had done that, we are going to get real mad at, and he's not one of them.”

As it turns out, Wilkins is also a practical joker, and head coach Dabo Swinney said he'd been one of Wilkins’ targets. 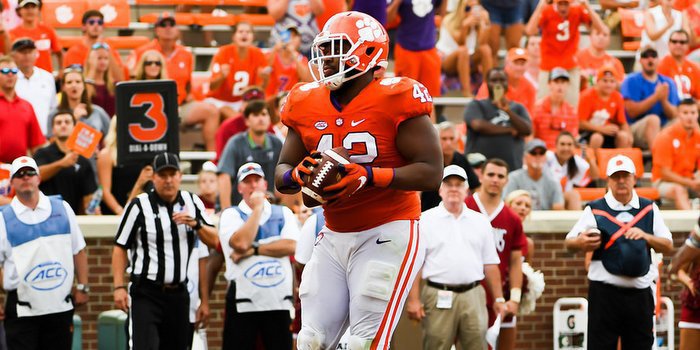 Christian Wilkins has done everything for the Tigers this season"

“You get to know these guys, but you know them better once they get here. He's got a big sense of humor. He's a practical joker,” Swinney said. “He called me to tell me he was going to make his decision. We didn't know. I didn't know. Usually, you know. I didn't know then. I didn't have a good feeling. He calls me up and starts giving me the 'I love you, but' speech. He gave me this long talk and thanked me for recruiting him. He just appreciated how we treated him and his family. He just went on and on and on. And then I'm ready to tell him I enjoyed recruiting him. I knew the 'but' was coming. Finally, here comes the but. He says, 'But … that's why I'm committing to Clemson.' I'm like, 'What?' It just completely caught me off guard.”

It didn’t end with that phone call.

“He called me last Friday, actually. He was flying out to see his girlfriend in Colorado,” Swinney said. “He told me that he and his girlfriend were going to elope and he was going to step away from football. He's so goofy. He's just always doing stuff like that. He's fun at practice every day. He brings a great energy. He really thinks he can do anything. Heck, I'm not sure that he can't.”

“He knew right away. He shut it down pretty quick,” Wilkins said. “He knew it was a joke.”

"Whenever I get an opportunity, I just like to joke around with guys and have fun," he said. "When things are high-stress and could be tense I like to have fun, just to make things easier."